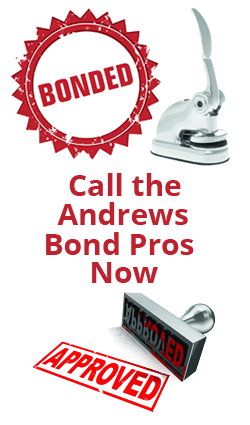 Call Pro Surety Bond today for a fast and free bond quote. We specialize in all types of Contract and Construction Bonds including Payment and Performance Bonds, Subdivision and Off Site Bonds, Bid Bonds, License and Permit Bonds, Court Bonds, Fidelity Bonds and all types of Miscellaneous Surety Bonds. There is no question about it, calling 800-314-7003 is where you'll find among the best surety bond premiums the industry has to offer. You'll have a great experience after buying a bond from us. Call the Andrews Surety Bond Pros at 800-314-7003!

Call 800-314-7003! What is a surety bond? A surety bond can, among other things, assure the people you do business with that you are a person of good standing in your industry. Let’s say you are a title insurance direct operator. That business has a lot of regulation related to the Texas title Insurance Act that dictates how much you charge for title insurance and the services returned. It’s important for the government that you operate within the guidelines, so the government requires you to have a surety bond to protect the public from the few bad apples in the industry. The surety company furnished the guarantee that if a claim is made against the bond by either the government of the public, the surety will make sure that the claim is paid, through a short term loan to the claiming party. Pro Surety Bond has over 25 years of combined industry experience, and it’s an experience you can take advantage of when you call us. Do so today even if your credit is not great. We have a program for almost everyone. Call 800-314-7003!

If you are bidding on public projects for the City of Andrews you may be required to post a Bid Bond. The Bid Bond guarantees you will be able to provide the Performance Bonds required in the event you are the low bidder. In essence the Bid Bond pre-qualifies you for the work you are bidding on. Not all jobs require bonding but if they do we can assist you with Bid Bonds, and subsequent Performance and Payment Bonds as required by the state. Please call the Contract Bond Team at Pro Surety Bond for more information.

Click Here for Bidding Opportunities for the City of Andrews

Andrews is a city in Andrews County and it is the 199th most populous city in the state of Texas. Andrews, both the city and the county, were named after one Richard Andrews, said to be the first Texas soldier killed in the Texas Revolution, although the site of Andrews is not where he was killed. Oil was discovered in 1929 and the city was incorporated in 1937. It remains the only incorporated city in the county. Today Andrews is known as the first site of the Kirby vacuum cleaners outside Ohio, and is sometimes known as “Kirby West” and for being an important part of the West Texas Region.

The economic prosperity of Andrews has rested largely on oil and soil. The first oil well was drilled in 1929 and became one of the biggest oil producers in the state, with over 1 billion barrels pumped. Given the boom and bust nature of the oil business, the city has had to come up with other ways to bring in money. Waste disposal is one of them, with Waste Control Specialists operating a 14,000 acre facility near the border with New Mexico. Since 2009 it has been licensed to dispose radioactive waste by the TCEQ, and now employs about 130 people.  Call the Andrews Surety Bond Pros Today at 800-314-7003!

What is an obligee with respect to surety bonds? In a surety bond transaction, the obligee is the party that wants coverage from the actions (or lack of action) of another party, and it’s one of the most striking features that distinguishes surety bonds from liability insurance. You might even be able to say that from the obligee’s point of view they are liability insurance, but limited to and paid for by the party that you want coverage from. The obligee is in a sense the final customer in the surety bond transaction because without the obligee, there would be little warrant for surety bonds to exist.

How are surety bond premiums calculated, as opposed to liability insurance? The key difference is how the risk is distributed. With liability insurance, the aggregate risk is determined by actuarial formulae, with the premiums pooled to distribute the risk among all policy holders. With surety bonds there is no distributed risk. The bond purchaser remains responsible for any indemnities, and must pay the surety back if a valid claim is paid. The surety bond purchaser pays the surety to act as a short term loaning institution, in essence. Give us a call at 800-314-7003

The Surety Bonds We See Most Commonly in Andrews, TX