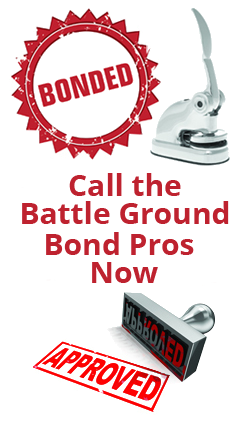 Reach out to the professionally trained surety bond staff at Pro Surety Bond. We specialize in all types of Contract and Construction Bonds including Payment and Performance Bonds, Subdivision and Off Site Bonds, Bid Bonds, License and Permit Bonds, Court Bonds, Fidelity Bonds and all types of Miscellaneous Surety Bonds. Talk to the voice of experience by calling 800-314-7003. Speak to a surety bond team member. Call the Battle Ground Surety Bond Pros at 800-314-7003!

Call 800-314-7003! What is a surety bond? Let’s take an example. Say someone has made a promise to you, but you don’t really know them and are not sure if you can really trust them. Let’s further say that this party has told you that a company will take care of you if he doesn’t fulfill the obligation. That sounds like a much better deal. Surety bonds work that way. The party that wants the guarantee from you makes you buy a surety bond, the latter of whom will fulfill the guarantee. However, the purchaser is still liable for the amount, but the surety essentially forwards you the money until you can pay them back. Pro Surety Bond has over 25 years of combined experience in the bond industry, and we are ready to put it to work for you. Call 800-314-7003!

If you are bidding on public projects for the City of Battle Ground you may be required to post a Bid Bond. The Bid Bond guarantees you will be able to provide the Performance Bonds required in the event you are the low bidder. In essence the Bid Bond pre-qualifies you for the work you are bidding on. Not all jobs require bonding but if they do we can assist you with Bid Bonds, and subsequent Performance and Payment Bonds as required by the state. Please call the Contract Bond Team at Pro Surety Bond for more information.

Click Here for Bidding Opportunities for the City of Battle Ground

In The Shadow Of The Cascade Mountains

Battle Ground, Washington is not named after a battle, at least not one that actually happened. The short of it is that there was a showdown between US soldiers at Fort Vancouver with the local Indians nearby. The Indians high tailed it out of there with Captain William Strong in pursuit, and when they caught up with them near what is today Battle Ground, Washington, both parties copped a deal and it was amicably agreed that the Indians would return to the Fort Vancouver area. The location became known as Strong’s Battle Ground, an ironic commemoration it would seem.

The economy and population of Battle Ground has increased dramatically in the past decade, and it has caused officials to reevaluate how to best expand infrastructure, services and amenities to maximize the overall livability of the city. The city now as a 50 year plan which is aimed at maintaining the small town feel in an area that has many services nearby. The downtown district is the centerpiece of the Battle Ground with its main throughway named Main Street of all things. The commercial district is here with locally owned stores, and a service center with businesses like Dollars Corner and Brush Prairie. All in all Battle Ground is great for small business owners. Call the Battle Ground Surety Bond Pros Today at 800-314-7003!

What types of things are important in the eyes of a surety company when it comes to building contractors? One of the most important things a surety company wants to do is make sure there are no ruffled feathers that make underwriting difficult. Sureties like to see companies that are stable in every respect, and thus have an interest in making sure that management stays continuous. Sometimes the surety may want the contractor to have a written back up plan in case of, for instance, sudden death of any key management personnel, and a plan for management succession so there are no mixups.

I’m in the construction business. How do I keep my bonding capacity at its maximum? The construction industry is the most “bond intensive” industry around because of the large amount of risk and sometimes getting bonding can be difficult. A few things you can do to make sure you don’t find yourself hitting a dead end, make sure that you keep great accounting records with independent verification by accounts, make sure you read the fine print on any contract you sign, get a banker who can work with you for short term credit if you need it, and get a bond agent who knows his way around the industry. Give us a call at 800-314-7003

The Surety Bonds We See Most Commonly in Battle Ground, WA