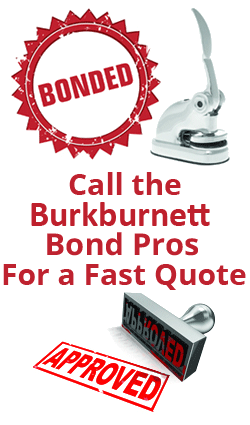 Reach out and speak to a professionally trained representative at Pro Surety Bond. We specialize in all types of Contract and Construction Bonds including Payment and Performance Bonds, Subdivision and Off Site Bonds, Bid Bonds, License and Permit Bonds, Court Bonds, Fidelity Bonds and all types of Miscellaneous Surety Bonds. We are the voice of experience so call us at 800-314-7003 It’ll take less time and money than you think. Call the Burkburnett Surety Bond Pros at 800-314-7003!

Call 800-314-7003! What is a surety bond? A surety bond, among other things, tells the government that you can be trusted because you have a third party financial institution backing them up. Let's say you are a lottery agent. Being a lottery agent is a lot like collecting sales tax for the state in that the state is trusting you with their funds, and naturally they might want a guarantee that you will remit those funds according to schedule. So they make you take out a surety bond, which is backed by the financial strength of the surety company, as it is a financial institution that has its own regulations. It doesn't happen often, but if you don't make your deposit, a claim can be made against the bond, in which case the surety will give you a short term loan to cover the claim. Pro Surety Bond has over 26 years of combined industry experience, so pick up the phone and call right now. Call even if you think it’s too much of a nuisance to buy a surety bond. We have been known to do wonders. Call 800-314-7003!

If you are bidding on public projects for the City of Burkburnett you may be required to post a Bid Bond. The Bid Bond guarantees you will be able to provide the Performance Bonds required in the event you are the low bidder. In essence the Bid Bond pre-qualifies you for the work you are bidding on. Not all jobs require bonding but if they do we can assist you with Bid Bonds, and subsequent Performance and Payment Bonds as required by the state. Please call the Contract Bond Team at Pro Surety Bond for more information.

Click Here for Bidding Opportunities for the City of Burkburnett

Burkburnett is a city in Wichita County and it is the 205th most populous city in the state of Texas. Burkburnett was settled by ranchers in 1856, during which time the city was known as Nesterville. It remained a modestly populated city for decades until 1906 when one Samuel Burk Burnett sold about 16000 acres to investors associated with the railroad who wanted to extend their wheat growing operation into Texas from Oklahoma. Now that the land fell into railroad territory the land could be parceled and sold. It was Teddy Roosevelt that gave the city its name when he came to the area at the invitation of Mr. Burnett. Oil was discovered in 1912 which led to a population explosion, and was only topped by the arrival of Sheppard Air Force Base, Today Burkburnett is an important part of the Wichita Falls metropolitan area.

Burkburnett is a thriving and vibrant city that can offer a great place to relocate your business. It’s located on Interstate 44 which makes it convenient Wichita Falls and other metropolitan area in Texas. It is a family oriented community with a flexible and eager workforce, a civically involved citizenry and beautiful vistas to boot. Burkburnett offers site location assistance and a host of economic incentives along with important demographic data you need to relocate and market the products of your business. On top of that, it offers low permit fees, a great quality of life and workforce development.  Call the Burkburnett Surety Bond Pros Today at 800-314-7003!

What can a surety bond do for me what a letter of credit cannot? One of the chief differences between surety bonds and letters of credit is how they approach their responsibility to the beneficiary. Letters of credit are essentially promises by a bank to pay out a certain amount with a cap to a party that produces a certain requisite paperwork to the bank. The bank is not concerned about the breach of contract, merely that there be a claim of breach of contract. The relationship of the surety bond company to the beneficiary is a bit different.

When a surety bond has a claim made against it, it is the surety’s job to investigate the validity of the claim. This does not mean that the surety represents the bond purchaser, at least not in a legal sense. They do represent the bond purchaser informally in the sense that neither wants to pay an invalid claim, and that’s why you want to purchase your bond from a company that investigates claims regularly (not all do). It’s also worth keeping in mind that it’s also not always in the best interest of the surety to try to weasel out of a claim, since the party that makes a claim is also the true customer in the sense that it was the party that asked for the bond in the first place. Give us a call at 800-314-7003

The Surety Bonds We See Most Commonly in Burkburnett, TX