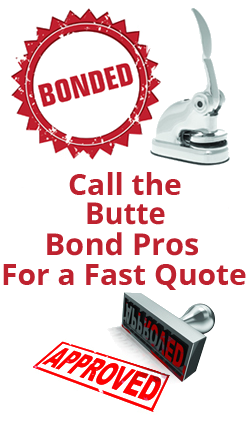 Fear no more, Pro Surety Bond is here to find you the best bond premiums. We specialize in all types of Contract and Construction Bonds including Payment and Performance Bonds, Subdivision and Off Site Bonds, Bid Bonds, License and Permit Bonds, Court Bonds, Fidelity Bonds and all types of Miscellaneous Surety Bonds. It’ll only take a minute to call us at 800-314-7003 It’s a great feeling knowing you’re in good hands. Call the Butte Surety Bond Pros at 800-314-7003!

We Are Your Next Butte Surety Bond Provider

Call 800-314-7003! So what is this surety bond for? We get this question day in, day out, so we know exactly what to tell people. We usually give the example of a company like a collection agency. There are a few bad apples in that business, but it only takes a few to make regulators crackdown on everyone. That means that when you commit an infraction of the regulations that govern that industry you can be fined, but what if you try to weasel out of paying the fine by declaring bankruptcy? That’s where the surety bond comes in. The government often makes business owners purchase a surety bond in order to cover themselves (the government) in case the business cannot pay. Pro Surety Bond covers itself every day when its tracks down the most incredible savings on surety bonds it can find in its network of underwriters, and we serve the poor credit segment of the market as well. So don’t be afraid to call. Call 800-314-7003!

If you are bidding on public projects for the City of Butte you may be required to post a Bid Bond. The Bid Bond guarantees you will be able to provide the Performance Bonds required in the event you are the low bidder. In essence the Bid Bond pre-qualifies you for the work you are bidding on. Not all jobs require bonding but if they do we can assist you with Bid Bonds, and subsequent Performance and Payment Bonds as required by the state. Please call the Contract Bond Team at Pro Surety Bond for more information.

Click Here for Bidding Opportunities for the City of Butte

The Richest Hill On Earth

Butte, Montana is a small town with a rich and complex history, one of the most unique in the United States. It got its humble start as nothing more than a collection of mining camps in the 1870s. Subsequently silver and copper were discovered which started the boom that created the state as we know it. Copper was the big money maker, and it has been estimated that around the turn of the 20th century Butte supplied one-third of all copper in the United States. World War I only trebled the need for metals and it made the previous copper boom look like a game of croquet. By this time big oil was getting involved in the area with Standard Oil Company buying up a substantial percentage of the mines for its smelting operations. This new company, the Anaconda Mining Company, would go on to become the fourth largest company in the world in its day. Even this company surpassed itself when it began strip mining in the area, but that industry declined and after 1982 the Berkeley Pit as it was called was closed. In recent years a Gallup poll was conducted to see which citizens believe the state they live in to be the best. Montana placed number one with 77% of those surveyed saying that the state was to find the best a living, and many say that you haven't seen a real Montana until you seen Butte. It's probably the city with the most to offer.

The Butte economy has been slow for number of years, but the good news is that it's been improving steadily. One problem historically has been that the mineral industry is by nature volatile and when things are up everything is good but when things are down they are really down. For this reason Butte has had to face the music and admit that the days of Butte’s boom time, mineral or otherwise, are over and the city is now focused on long-term development for the betterment of its citizens. Industries today are more diversified, with a focus on building the manufacturing sector. Curiously the economy is expected to get another boost with the opening of a gold mine that is being considered. The more things change… Otherwise Butte is doing well. Montana Tech is expanding its operation for more students and the aging population means that there will be a lot of job growth in the medical industry as well. Even restaurant chains are beginning to move in, which isn't too bad considering there are only about 35,000 people who live here. Call the Butte Surety Bond Pros Today at 800-314-7003!

Butte doesn’t sound like too bad a place to open a business. Remember however that most industries are regulated and require a surety bond, so don’t think you’re the only one who needs one. Are you a building contractor? If so you may be asked to take out a surety bond so that you fulfill your obligation to finish up the project you committed to on time and up to snuff. Do you own a cosmetology school? There are regulations which govern the training given to students among other things in that business. Do you own a barber in school? Same thing goes for barbers. These industries have little in common but they all require a surety bond in order to be licensed.

No, pricing a surety bond is not exciting, and our agents are sensitive to the fact that our clients would almost always rather be doing something else instead of tracking down the best premiums they can find. That’s why you’re lucky you landed on this page. We track down the best rates for you, and we do it with all the speed and courtesy we can muster. We feel that it’s a level of customer service that everyone should expect and enjoyed. Pro Surety Bond has over 25 years of surety bond industry experience, and if you pick up the phone we can prove it to you. Give us a call at 800-314-7003

The Surety Bonds We See Most Commonly in Butte, MT