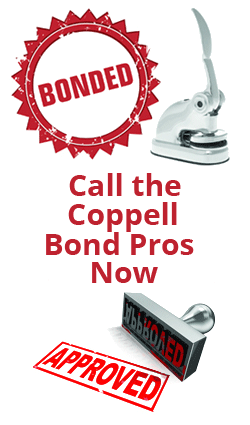 Pick up the phone and call Pro Surety Bond for your next surety bond. We specialize in all types of Contract and Construction Bonds including Payment and Performance Bonds, Subdivision and Off Site Bonds, Bid Bonds, License and Permit Bonds, Court Bonds, Fidelity Bonds and all types of Miscellaneous Surety Bonds. You can call us any day during business hours at 800-314-7003 We care about every client. Call the Coppell Surety Bond Pros at 800-314-7003!

Call 800-314-7003! What is a surety bond? A surety bond is not related to corporate bonds like stocks and bonds. It’s more useful to think of a surety bond as a short term loan the surety company makes to the purchaser of the bond (the principal), to cover any indemnity the principal may have incurred by the party that requested the surety bond (the obligee). The reason there is the surety as a third party is that the obligee needs coverage from the principal, but the obligee cannot simply take the principal at his word that he will, say, obey the regulations of the industry he is in. So the surety takes on the principal’s risk after vetting his financials or credit history to make sure he is a good risk. Pro Surety Bond is a good risk when it comes to this business and we think our large renewal rate speaks for itself. Call today, even if your credit isn’t great. We have something for almost everyone. Call 800-314-7003!

If you are bidding on public projects for the City of Coppell you may be required to post a Bid Bond. The Bid Bond guarantees you will be able to provide the Performance Bonds required in the event you are the low bidder. In essence the Bid Bond pre-qualifies you for the work you are bidding on. Not all jobs require bonding but if they do we can assist you with Bid Bonds, and subsequent Performance and Payment Bonds as required by the state. Please call the Contract Bond Team at Pro Surety Bond for more information.

Click Here for Bidding Opportunities for the City of Coppell

Where Family And Community Last A Lifetime

Coppell is a city in Dallas County and is the 69th most populous city in the state of Texas. The area that would become Coppell was settled by French and German immigrants in the 1840s. The place was originally called Gibbs Station, after one Barnett Gibbs, who would server later as one of the first lieutenant governors in the state, but it would be renamed after a man named George Coppell, a large scale investor involved with bringing the railroad to the town. Today Coppell is a suburb of Dallas and a bedroom community serving the Dallas Fort Worth metro-plex.

Thanks to being a part of the Dallas Fort Worth area, and being near the airport in particular, the economy of Coppell is doing quite well. As with most places near an airport, Coppell hosts a number of large scale distribution centers, including Amazon, Lucent, Container Store and Mohawk Industries. A few years ago Samsung opened a combined cell phone distribution and manufacturing center in Coppell. City officials believe that providing a positive business environment has played a large role in the economic upswing the city has enjoyed.  Call the Coppell Surety Bond Pros Today at 800-314-7003!

What kinds of surety bonds are there? There are quite a few, but they are usually broken up into three main branches: contract bonds and commercial bonds. Contract bonds are commonly used in construction projects, to protect project managers from subcontractors who may not finish their segment of the project on time or not up to scratch. Commercial bonds include license and permit bonds, which exist for the most part to encourage enterprises to do business honestly and above board. They may also act as a way of making sure a fine is paid.

There is another type of bond, called court bonds, which can be broken up into judicial bonds and fiduciary/probate bonds. Judicial bonds protect a party against the vagaries of litigation and exist primarily to protect one of the parties from wrongful appeals or the like. For instance, if a party in litigation seeks an injunction against another, the court may require the party seeking the injunction to purchase a bond to protect the other party, in the event that the appeal was unfounded. Give us a call at 800-314-7003

The Surety Bonds We See Most Commonly in Coppell, TX