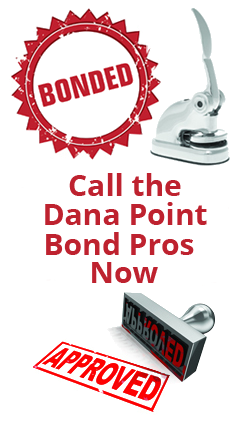 It feels good when you get the best surety bond premiums from Pro Surety Bond. We specialize in all types of Contract and Construction Bonds including Payment and Performance Bonds, Subdivision and Off Site Bonds, Bid Bonds, License and Permit Bonds, Court Bonds, Fidelity Bonds and all types of Miscellaneous Surety Bonds. The only thing you have to do is call 800-314-7003 and you'll be on your way. Our agents are here to take calls and talk to anyone who needs the scoop on surety bonds. Call the Dana Point Surety Bond Pros at 800-314-7003!

Call 800-314-7003! Security and trust are things difficult to come by in this world, but the world can't run without that trust. Surety bonds were devised to solve this problem by asking someone to put up some money in the form of a bond to "vouch" for themselves. Say you run a for-profit school of some kind. These schools are tightly regulated and the government expects you to adhere to those rules. So, they require you to take out a bond to "encourage" you to follow those regulations, the logic being that if you are willing to put up some of your own money in the form of a bond to vouch yourself, you're more likely to adhere to the regulations. Pro surety Bond adheres to the highest regulator in the land: our clients. They come to us for the most moderately priced bond rates and we deliver, even for those without the best credit. You owe it to yourself to call today for a fast quote. Call 800-314-7003!

If you are bidding on public projects for the City of Dana Point you may be required to post a Bid Bond. The Bid Bond guarantees you will be able to provide the Performance Bonds required in the event you are the low bidder. In essence the Bid Bond pre-qualifies you for the work you are bidding on. Not all jobs require bonding but if they do we can assist you with Bid Bonds, and subsequent Performance and Payment Bonds as required by the state. Please call the Contract Bond Team at Pro Surety Bond for more information.

Click Here for Bidding Opportunities for the City of Dana Point

"The Most Romantic City in California"

Up until the 1950s Dana Point was a sleepy little town by the ocean that was hardly known to anybody except surfers and locals. Things have changed since then but in many ways it maintains its small town feel, but augments it with newer features like a harbor (one of the few in Orange County), numerous specialty boutiques and tons of restaurants. At the end of the day you can take a stroll along the palm tree lined paths that overlook the ocean. The founder of the city, Richard Dana, christened it the "most romantic place in California" and there's no doubt it's the view that inspired him to say that. Many homes here are situated on cliffs that overlook the ocean and you can see anything from frolicking dolphins to arguably the most spectacular sunsets in the world.

The economy of Dana Point is generally healthy. A good indicator is the fact that 50% of the population makes over $60,000 here. Another reason the city is so economically healthy is that officials in here have guided the city well, to such a degree that it was able to sidestep much of the 2008 economic downturn that plagued the rest of the world. One way they've done that is with a cautious and conservative investment policy that favored safety over growth. In the 90s the county went broke and since that time the state and county regulate the degree of risk a city may take with its investment; but Dana Point has always has a more restrictive policy, which is one of the reasons that it was able to weather the Lehman Brothers collapse that destroyed the coffers of so many municipalities across the county, the state and country. The policy is sound but it’s also the reason for the fairly low job growth. All is not lost however, because Dana Point can boast an unemployment rate that is a staggeringly low 3.5%. Call the Dana Point Surety Bond Pros Today at 800-314-7003!

Surety bonds are everywhere and in more ways than you would imagine. Probably most surety bonds are license and permit bonds which businesses must buy in order to get a license, and in most cases these exist to make sure you observe the regulations that govern your industry. For instance, if you own a retail business, you will need a sales tax bond because the department of taxation needs to trust you with its money, but it can't practicably do enough of a background check on you to ensure its trust. So they make you take out a surety bond because there's nothing speaks louder than when you put your money where your mouth is. Pro Surety bond has over 25 years of combined industry experience putting its money where its mouth is, and we think it behooves you to call us for a fast and free surety bond quote.

You've landed on this page, so it's apparent that you need a surety bond. We know that it can be taxing to figure out how to price something that you don't know much about and no one seems to know much about either. You don't even know everything that needs to be taken into account. However, we think there are two questions you should get answered before you make a choice on a provider. The first is, will you provider show outstanding motivation when smoking out the most inexpensive premiums in his network of providers, and the second is, will he do it with courtesy that is second to none? Pro Surety Bond insists that it is unparalleled on these two counts and we can make this fact work for your benefit. Give us a call at 800-314-7003

The Surety Bonds We See Most Commonly in Dana Point, CA