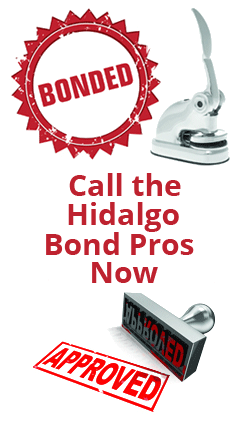 Only the best service is good enough for the clients of Pro Surety Bond. We specialize in all types of Contract and Construction Bonds including Payment and Performance Bonds, Subdivision and Off Site Bonds, Bid Bonds, License and Permit Bonds, Court Bonds, Fidelity Bonds and all types of Miscellaneous Surety Bonds. All it takes is one simple phone call to 800-314-7003 you'll have your bond. See how easy it can be to purchase a surety bond. Call the Hidalgo Surety Bond Pros at 800-314-7003!

Call 800-314-7003! What is a surety bond? A surety bond, among other things, allows the public to trust you to do business in an upright manner, safely and according to regulations. Let’s say you own a business that does charitable telephone solicitation for law enforcement organizations. This is a sensitive job, one that involves handling money for important charities, and one that has a lot of regulations attached to it. For that reason the government requires anyone in that business to purchase a surety bond. A surety bond is a guarantee backed by the financial reputation of a surety company, and it covers the government and the public at large from fraudulent practices on the part of such telephone solicitation operations. Pro Surety Bond has over 25 years of combined industry experience, and we would like to show you why. Call us even if your credit is not so good. We have something for almost everyone. Call 800-314-7003!

If you are bidding on public projects for the City of Hidalgo you may be required to post a Bid Bond. The Bid Bond guarantees you will be able to provide the Performance Bonds required in the event you are the low bidder. In essence the Bid Bond pre-qualifies you for the work you are bidding on. Not all jobs require bonding but if they do we can assist you with Bid Bonds, and subsequent Performance and Payment Bonds as required by the state. Please call the Contract Bond Team at Pro Surety Bond for more information.

Click Here for Bidding Opportunities for the City of Hidalgo

Hidalgo is a city in Hidalgo County and it is the 202nd most populous city in the state of Texas. Hidalgo started out as a desert settlement and was mostly devoted to cattle grazing for its first 150 years, starting in 1749 when it was first settled. The city was originally called Edinburg, but was changed in honor of Mexican patriot Miguel Hidalgo y Costilla. The railroad decided to not run a line through the city but chose McAllen instead, yet the city remained important as a frontier crossing point. The railroads did arrive finally in 1913, and a bridge connecting to Reynosa was built about 15 years later.

Today Hidalgo is the fourth largest United States Port of Entry, and promotes itself as a friendly destination convenient to Mexico. In 1990 it received the dubious distinction of having the first appearance of the so called Africanized Killer Bee, which caused no small amount of damage to the city’s reputation. But the people of Hidalgo bounced back and commissioned a preposterously (one might say comically) sized one ton, fully colored sculpture of the “Killer Bee!” which itself has become a topic of discussion and tourist draw itself.  Call the Hidalgo Surety Bond Pros Today at 800-314-7003!

Will I need collateral to get a contract bond for my construction business? Not always, but sometimes companies that have fallen on hard times can find it challenging to get the bonding they need. The types of collateral accepted include letters of credit, investment securities (if the underwriter agrees), and certificates of deposit with agreements on whom is paid the interest on the account. If the collateral is delivered to the surety, the surety will then prepare and execute a collateral agreement.

How are bond premiums calculated? One of the striking differences between surety bonds and liability insurance is the way premiums are calculated. Liability insurance premiums are reckoned according to the expectation of payouts, and so the premiums are pooled so as to distribute the risk and among a group of policy holders. The surety bond purchaser is always responsible for his indemnities, and purchases the bond to get the surety to act as a guarantor of a commitment the bond purchaser has made to another party. The surety can pay a valid claim in short time, and then the surety must be reimbursed. Give us a call at 800-314-7003

The Surety Bonds We See Most Commonly in Hidalgo, TX