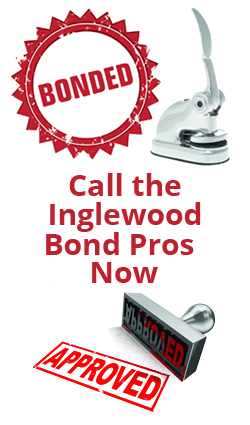 There's no reason to call any one else after speaking with Pro Surety Bond for your next surety bond. We specialize in all types of Contract and Construction Bonds including Payment and Performance Bonds, Subdivision and Off Site Bonds, Bid Bonds, License and Permit Bonds, Court Bonds, Fidelity Bonds and all types of Miscellaneous Surety Bonds. Please call 800-314-7003 and get the bond information you need. Why wait any longer? Call the Inglewood Surety Bond Pros at 800-314-7003!

Call 800-314-7003! So many people call us wanting to know what a surety bond is, sometimes we think maybe we should make a recording as an answer. If we did do that, the recording would say that they are a means by which the public or another entity can be protected from the unlawful practices of my business. We know it’s not you, but it only takes one bad egg to make it a hassle for everyone else. Say you own a business that supplies medical equipment for the Medicare system. There are tons of regulations governing that industry, and regulators are serious about you obeying them, so they require you to take out a surety bond. Think of it as a way of holding you monetarily accountable. Pro Surety Bond is held accountable to its clientele when scouring the market for the best rates, and we’ll do the same for you. Call 800-314-7003!

If you are bidding on public projects for the City of Inglewood you may be required to post a Bid Bond. The Bid Bond guarantees you will be able to provide the Performance Bonds required in the event you are the low bidder. In essence the Bid Bond pre-qualifies you for the work you are bidding on. Not all jobs require bonding but if they do we can assist you with Bid Bonds, and subsequent Performance and Payment Bonds as required by the state. Please call the Contract Bond Team at Pro Surety Bond for more information.

Click Here for Bidding Opportunities for the City of Inglewood

Carson City is the City of Champions

Inglewood's started out as a 25000 acre parcel of land carved out of Centinela Ranch i the 1888, shortly after which the railroad came through. It was finally incorporated in 1908 when it reached a population of 1200. The rate of population growth increased rapidly after that, with Inglewood being designated the fastest growing city in the United States in the years from 1920 to 1925. In 1927 came aircraft manufacturing, which later gave way to the national space and missile program in 1954 when the U.S. Air Force established the Western Development Division. The 1970s saw the rapid growth of multiculturalism and the arrival of the first high rise residential buildings. Inglewoods accessiblity view major freeways and Los Angeles Intenational Airport make the city's viability an enduring characteristic. 2014 Inglewood was named Los Angeles's Neighborhood of the Year, beating out even Bunker Hill and arts district. things taht led to this were the renovation and reopeingn of teh Inglewood Forum and it's now the most concert successful large venue in Los Angeles. Work is now afoot on the Crenshaw Line, which will have two stops in Inglewood, thanks mainly to the mayor of Inglewood having a seat on the Metro Board. It's on the short list of sites for the new NFL stadium.

Inglewood has made earnest efforts to build the city's tax base by committing itself to doing whatever it takes to help businesses prosper in the city. It is capitalizing on its prime location, top grade medical facilities and access to the airport to attract outside investors. In 2015 city officials approved a $1.86 billion stadium on the site of the old Hollywood Park racetrace for the St Louis Ram's football team -- which is losing its old home to a new riverfront stadium owned by the city -- and all paid for by taxpayer money. The appeal of a deal like this for both parties is the development opportunities that sprout up around such a large complex, and the vast marketing opporunities that come with stadium sponsorship to the tune of $100 million a year. As of this writing the owner of the Rams has not agreed to teh deal, but officials say that the stadium may still be built for another team if teh Rams don't accept it. Call the Inglewood Surety Bond Pros Today at 800-314-7003!

It’s great living in Inglewood and greater making a living here, but at some point you’ll need a surety bond to get things off the ground. What might you need one for? Do you own a pawn shop? Do you own a pest control company? Are you a process server? These industries are completely unrelated, but they all require a surety bond to be in business. Pro Surety Bond has over 25 years of combined industry experience extracting the most inexpensive premiums for our clientele, and we’re here to do it for you too. Call today for a fast and free quote

The Most Popularly Priced Premiums on Inglewood Surety Bonds

Surety bonds just aren’t that interesting to someone who isn’t in the industry so we won’t try to sell you on the idea. We will however try to sell you on the idea that it’s important to think about which provider you choose because in many cases you will be stuck with them for one year. There are two things to think about here: One is will your provider do his utmost to track down the most reasonably premiums he can uncover, and will he deliver the goods with decorum and honesty? Pro Surety Bond outstrips everyone else in these ways and others because we know that building long standing relationships is the only way to do business. Give us a call at 800-314-7003

The Surety Bonds We See Most Commonly in Inglewood, CA