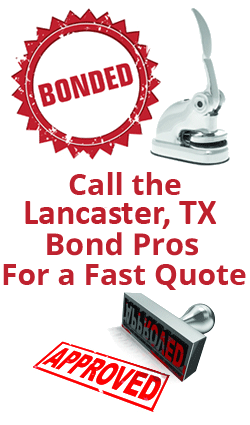 Don't forget to call Pro Surety Bond before you buy a bond from anyone else. We specialize in all types of Contract and Construction Bonds including Payment and Performance Bonds, Subdivision and Off Site Bonds, Bid Bonds, License and Permit Bonds, Court Bonds, Fidelity Bonds and all types of Miscellaneous Surety Bonds. If you need your surety bond quickly, call 800-314-7003 Why wait any longer to call? Call the Lancaster Surety Bond Pros at 800-314-7003!

Some of the Lowest Rates on Lancaster Surety Bonds

Call 800-314-7003! What is a surety bond? Surety bonds occupy a niche in the risk management field, one that liability insurance isn’t really designed for. Cases arise whereby risk management is needed, but the possibility of payouts is not particularly common. Thus, if you are trying to get a business license, you have probably discovered that you need a surety bond, and it’s designed to cover your governmental licensing body in case you do not adhere to the regulations of your industry. Specifically it covers fines unpaid if necessary, but this does not happen often. Pro Surety Bond has been helping small businesses in Lancaster, Texas fulfill their surety bond requirements, even if their credit is not great. We have a program for almost everyone. Call 800-314-7003!

If you are bidding on public projects for the City of Lancaster you may be required to post a Bid Bond. The Bid Bond guarantees you will be able to provide the Performance Bonds required in the event you are the low bidder. In essence the Bid Bond pre-qualifies you for the work you are bidding on. Not all jobs require bonding but if they do we can assist you with Bid Bonds, and subsequent Performance and Payment Bonds as required by the state. Please call the Contract Bond Team at Pro Surety Bond for more information.

Click Here for Bidding Opportunities for the City of Lancaster

Lancaster is a city in Dallas County, and it is the 81st most populous city in the state of Texas. Lancaster got its start in 1844 when one Roderick Rawlins became the first settler, courtesy of President Lamar of the Republic of Texas and his contract with William Peters to promote large tracts of the state for settlement to people from Kentucky, Illinois, Missouri and Tennessee in exchange for their own land. The community was then called Hardscrabble. Mr Rawlins daughter and her husband, MM Miller, opened a small general store in nearby Pleasant Run, platted it, sold the lots, and generally prospered. Unfortunately he neglected to notify the county of his land deals, and when Mr Miller died unexpectedly in 1860, Pleasant Run was more or less abandoned for Hardscrabble. Incidentally, the city’s name comes from the founder of the city, a Abram Bledsoe, who named it after Lancaster, Kentucky, his hometown, Today Lancaster is a vital part of the Best Southwest area, which includes Cedar Hill, DeSoto, and Duncanville.

The Lancaster, Texas Economic Development Council was created to facilitate site selection for businesses relocating and local businesses that want to expand. The council has been aggressively promoting the city’s value through strategic marketing, and it’s been a success. By making the business relocation and expansion process as seamless as possible, the city has gained a reputation as a business positive place. Additionally the city has encouraged capital investments from not only from the United States but from foreign countries.  Call the Lancaster Surety Bond Pros Today at 800-314-7003!

How does safety performance affect a building contractor’s ability to obtain a bond? Safety is paramount in construction projects, because any accident is a setback. Companies that have a history of poor safety performance usually find themselves fighting for bonding, because the bottom line is that poor safety affects a company’s bottom line like nothing else. When the economy is flush, contractors are often tempted to move forward as quickly as they can, and that means their entire system can become stressed: accounting wise, clerical wise, and safety wise.

The way out of the safety failure problem is a commitment to safety. Look for the red flags that show safety is slipping: mounting insurance and legal costs, profit fade, performance disputes, OSHA fines and the like point to problems. Poor safety can compromise a company’s net worth to the extent that its reputation is damaged or destroyed. When project owners see bad safety performance, the assume that the company is doing poorly in other ways. Give us a call at 800-314-7003

The Surety Bonds We See Most Commonly in Lancaster, TX