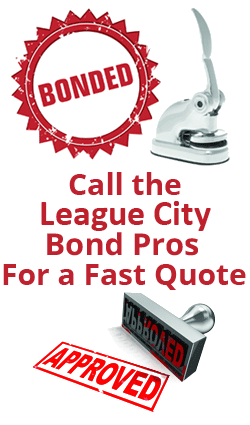 Contact Pro Surety Bond before you buy a bond from anyone else. We specialize in all types of Contract and Construction Bonds including Payment and Performance Bonds, Subdivision and Off Site Bonds, Bid Bonds, License and Permit Bonds, Court Bonds, Fidelity Bonds and all types of Miscellaneous Surety Bonds. If you call 800-314-7003 right now, you'll speak to a knowledgeable agent. Don't waste any more time. Call the League City Surety Bond Pros at 800-314-7003!

Call 800-314-7003! What is a surety bond? A surety bond is, despite its name, a type of credit that a surety company gives to someone to cover another party against loss, because of something the latter party failed to do. Let’s take the example of a retail or service business that collects sales tax on behalf of the department of taxation in your state. Collecting tax is important and when you are given a license you are committing yourself to collecting that tax and depositing it on time. However to encourage you to follow through on your promise, they make you take out a surety bond as a guarantee, backed by a surety company, that you will fulfill your vow the make your deposits on time. Pro Surety Bond has over 25 years of combined industry experience, finding the most affordable rates it can find for its clients, good and poor credit alike. Call 800-314-7003!

If you are bidding on public projects for the City of League City you may be required to post a Bid Bond. The Bid Bond guarantees you will be able to provide the Performance Bonds required in the event you are the low bidder. In essence the Bid Bond pre-qualifies you for the work you are bidding on. Not all jobs require bonding but if they do we can assist you with Bid Bonds, and subsequent Performance and Payment Bonds as required by the state. Please call the Contract Bond Team at Pro Surety Bond for more information.

Click Here for Bidding Opportunities for the City of League City

The Most Splendid City in Texas

League City is a city in Galveston County which lies within the Houston Woodlands Sugar Land metropolitan area, and is the 39th largest city in the state of Texas. League City got its start in 1873 when one Louisiana native George Butler settled on a spot that he attached his name to: Butler’s Ranch. However, the city gets its somewhat unconventional name from a man named J C League, who acquired some of the land from another man who had bought the parcel from Butler, and Mr League proceeded to build a town along the Galveston, Houston and Henderson Railroad. Mr Butler however remained postmaster and took umbrage that League wanted the namesake honor for the city, and a small nomenclature feud commenced, but ended up with Mr League winning out and League City becoming triumphant. Today League City hosts a number waterslide resorts, a 100,000+ square foot University of Texas Medical Branch Specialty Care Center, a number or large parks and recreational area, and a hot and humid climate,

League City is a city that is committed to providing material, economic, and community growth through judicious policy objectives aimed at enhancing the well-being of all its residents. The League City Planning Department believes that offering sound guidance on zoning and land use will allow the city to grow in less chaotic and more controlled way so as to provide a rational and humane framework for further growth into the 21st century. The city can also offer advice on how to apply for a business license, how to create a business plan, and can offer entrepreneurial assistance to qualified applicants Call the League City Surety Bond Pros Today at 800-314-7003!

Why do construction project owners prefer that their subcontractors be bonded? The simple reason is that if a company is not bondable, that means that it’s not in good enough condition to be bonded, which in turn means that doing business with that company raises your risk significantly. Project owners, particularly those with big projects or governmental projects, don’t want to be put in the position that they stand to lose millions of dollars of revenue because one contractor could not come through on his part of the project.

See, when a construction contractor cannot be bonded almost always means that to some extent the company’s condition is in disarray, either because their credit is screwed up, their key personnel are not experienced or loyal or reliable, or that they are operating on such thin margins that a slight derailment could put them in the red or out of business, and you too. Simply going to the trouble of getting bonded (and we will confess that the first time you are bonded it can mean a lot of work up front), of gathering the paperwork, of talking to bond producers and establishing business connections with underwriters, says volumes about your character and ability to do your job. Give us a call at800-314-7003

The Surety Bonds We See Most Commonly in League City, TX