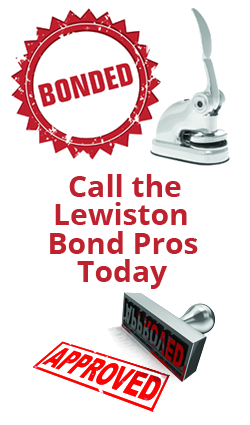 We'd love for you to choose Pro Surety Bond as your next surety bond provider. We specialize in all types of Contract and Construction Bonds including Payment and Performance Bonds, Subdivision and Off Site Bonds, Bid Bonds, License and Permit Bonds, Court Bonds, Fidelity Bonds and all types of Miscellaneous Surety Bonds. We have lots of experience in this industry, so call 800-314-7003 and let it work for you. There's no reason to wait any longer. Call the Lewiston Surety Bond Pros at 800-314-7003!

Call 800-314-7003! Why do I need this surety bond? To put it simply, surety bonds allow others to trust you. Put less delicately it's a way of getting you to put your money where your mouth is. Let's say you own a motorcycle dealership. There are regulations put in place to make sure to affirm the integrity of the way you do business, and if you break those regulations you can be fined. However, regulators don't want people weaseling out of their fines by declaring bankruptcy before their pay, so they require everyone to take out a surety bond before they can be licensed. There are escrow like accounts whereby you put up your own money to cover yourself, but that's a lot of money to put up--way more than you would need for surety bond. Pro Surety Bond is accountable to all its clients by providing the best rates for all inquirers, including poor credit cases as well. We have a package for almost everyone. Call 800-314-7003!

If you are bidding on public projects for the City of Lewiston you may be required to post a Bid Bond. The Bid Bond guarantees you will be able to provide the Performance Bonds required in the event you are the low bidder. In essence the Bid Bond pre-qualifies you for the work you are bidding on. Not all jobs require bonding but if they do we can assist you with Bid Bonds, and subsequent Performance and Payment Bonds as required by the state. Please call the Contract Bond Team at Pro Surety Bond for more information.

Click Here for Bidding Opportunities for the City of Lewiston

"May It Endure Forever"

Lewiston, Idaho, population 32,000, is the second largest city in the Northern Idaho region, trailing behind only Coeur d'Alene. The city was founded in 1861, and like many other cities which popped up during that time, it was the gold rush that pulled them. No one is exactly sure where the town got its name, but many believe it was named after either Meriwether Lewis the famed explorer, or the town of Lewiston, Maine. Lewiston was briefly the capital of the Idaho Territory but it was decided later the Boise was a better location, later meaning about six weeks before statehood would be announced. Outdoor Life magazine recently named Lewiston the number one city for fishing and hunting, which tells you a lot about what people want to do around here. The city's population is quite modest but there is quite a bit to do around here. There is nearly year round of golf with two country clubs, two public courses, a putting course and the PGA approved practice facility. There's the Washington - Idaho symphony, Brackenbury Square near the downtown shopping area, the Lewiston Civic Theater as well as, the great outdoors. It’s got a little bit of everything.

Lewiston's economy is based on agriculture, paper, timber, and light manufacturing. The city is the primary transportation hub of that region of the state and today also serves as an ideal location for a medical center and various other urban amenities. One curious feature of Lewiston's economic status is that of it being a seaport despite being in a landlocked state. The Port of Lewiston is navigable to the Columbia River via barges which transport large amounts of grain, legumes, paper, lumber and some manufactured goods up and down the Columbia River, whose mouth is located at the Pacific Ocean, in Oregon specifically. Clearwater Paper is the largest manufacturing interest, but the city in recent years has become a major ammunition manufacturing center with factories representing two brands of Alliant TechSystems, CCI and Speer Bullet. Another company named Extreme Bullet is located here as well. The economy of Lewiston has traditionally been limited to a few industries, but the economic development corporation is working towards diversifying the tax base to help keep the economy stable for its residents and the future of the city.Call the Lewiston Surety Bond Pros Today at 800-314-7003!

The economy in Lewiston is a pretty good shape so it should not be too difficult to earn a decent living with a small business. What kind of business are you in? Do you own a well drilling business? There are environmental regulations that govern that industry. Are you a fish and game and vendor? The public will want to know that you’re operating your business with integrity. Are you a seed buyer? There are regulations that pertain to that industry as well. You may not be in one of the industries mention above, but all of those industries require a surety bond before they can be licensed and it's likely that you will need one as well.

Only The Lowest Premiums Possible For All Lewiston Surety Bond Obligation

Nobody really loves surety bonds, except for us of course but that’s because we’re in the business. We will not try to convince you to choose us as your surety bond provider, because we understand if you want to do a little more pricing. However, before you choose a provider we think you should ask yourself a couple of questions. First is will your provider do everything necessary to find you the most attractively priced surety bond premiums he can find? Second, will he deliver the goods with integrity and courtesy? Pro Surety Bond affirms that it can do both and do it better than the competition. Call us today and let us show you. Give us a call at 800-314-7003

The Surety Bonds We See Most Commonly in Lewiston, ID