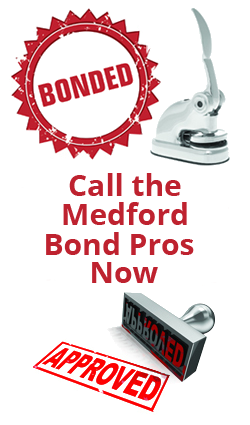 Make sure you call Pro Surety Bond when you are in the market for a surety bond. We specialize in all types of Contract and Construction Bonds including Payment and Performance Bonds, Subdivision and Off Site Bonds, Bid Bonds, License and Permit Bonds, Court Bonds, Fidelity Bonds and all types of Miscellaneous Surety Bonds. All you have to do is pick up the phone and speak to representative by calling 800-314-7003. You won’t believe how easy it is to purchase a surety bond. Call the Medford Surety Bond Pros at 800-314-7003!

Call 800-314-7003! “So explain to me what a surety bond is.” Our bond counselors get this question every day and we usually offer an example like that of an ATV dealer. There are numerous regulations in that industry that pertain to making sure that merchants operate their business honestly and above board. If you break those regulations you may be fined, but how can regulators make sure that you’ll have the money to pay the fine? They ask you to take out a surety bond as a way of vouching for yourself; it tells the public if you’re willing to put up your own money for the bond, you must be honest. Pro Surety Bond is honestly the best in the business because we find the lowest rates we can find for each and every client, whether they be good credit , bad credit or any type of credit in between. Call 800-314-7003!

If you are bidding on public projects for the City of Medford you may be required to post a Bid Bond. The Bid Bond guarantees you will be able to provide the Performance Bonds required in the event you are the low bidder. In essence the Bid Bond pre-qualifies you for the work you are bidding on. Not all jobs require bonding but if they do we can assist you with Bid Bonds, and subsequent Performance and Payment Bonds as required by the state. Please call the Contract Bond Team at Pro Surety Bond for more information.

Click Here for Bidding Opportunities for the City of Medford

Medford, Oregon, population 78,000, was named in November 1883 by one David Loring, a civil engineer for the Oregon and California Railroad, who suggested it be named Medford, Massachusetts near which Mr. Loring lived. The railroad was looking for the best route through the Rogue Valley, bypassing a town called Jacksonville and setting up the depot in a relatively undeveloped area. The city was platted, lots sold, and within three months from its founding the first building was put up. Today Medford is known for a host of things including Harry and David’s fruit baskets and the Medford Railroad Park which is as you might expect is a park with full size train cars including hoppers a caboose and even a working telegraph system. There’s the Bear Creek Greenway and 18 mile hiking and biking paths (no cars allowed), the Claire Hanley Arboretum and a host of golf courses and a few great bowling lanes if you’re not into golf.

In other times in the city’s history the Medford economy was fueled by agriculture including pears, peaches and wine grapes and timber products. To this day the largest employer in the Medford area is the Harry and David Operations Corp., which markets fruits and food gifts with 1700 permanent employees and nearly 7000 seasonal employees. Lithia Motors, a car manufacturer you probably haven’t heard of because it’s the ninth largest in the United States, has been here since 1970. The city is the host of two major Medical Centers, Asante Rogue Regional Medical Center, and Providence Medford Medical Center, each with 2000 employees. In 1967 Interstate 5 passed near downtown Medford and was blamed with initiating the decline of the downtown area. Medford’s economic development council however has been working on an economic recovery for that part of town in recent years, funded by both public and private interests. Much of the downtown area was not being used as efficiently as it could have been, but when the Lithia Motors moved their headquarters into the district and, it was a great boost to that part of the city.Call the Medford Surety Bond Pros Today at 800-314-7003!

As you can see the economy of Medford is very stable and we have no doubt that you’ll make a great living here. However, since you have arrived on this page it’s apparent that you are in the market for a surety bond, most likely in order to open a business. If that’s true, congratulations, you’re in good company. Most industries require a surety bond of some sort so it’s good to know that you’re in the same boat as thousands of others. Do you own a business that registers boats? Do you sell crypts and niches? Do you run a debt management service? Are you a trained nature guide? Each of these industries is quite different but they all need a surety bond to be licensed in the state of Oregon.

We Have The Answers You Need On Your Medford Surety Bond

Surety bonds are not only for getting a business license. Any time someone needs to be protected from loss that results from the principal (you) who has not fulfilled their obligation. The type of bond needed to get a business license is a license and permit bond, but there are other kinds also. There are contract bonds, for instance, in which general contractors of a large construction project require subcontractors to be bonded as a way of guaranteeing that the subcontractor will fulfill his part of the project according to the contract stipulations. There are also bid bonds, in which the general contractor may ask bidders to take out a bond to show that they are bidding in good faith and that they can fulfill their end of the bargain if they win the bid. It’s a way of keeping idle bidders away from the bidding process. The Pro Surety Bond has over 25 years of combined industry experience helping businesses meet their bond obligations and do it with great customer service experience. We can’t wait to do the same for you. Give us a call at 800-314-7003

Surety Bonds by Type Available in Medford, OR

The Surety Bonds We See Most Commonly in Medford, OR