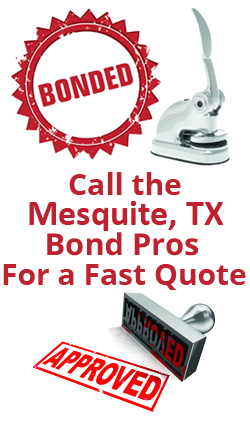 Find some of the best premiums on surety bonds at Pro Surety Bond. We specialize in all types of Contract and Construction Bonds including Payment and Performance Bonds, Subdivision and Off Site Bonds, Bid Bonds, License and Permit Bonds, Court Bonds, Fidelity Bonds and all types of Miscellaneous Surety Bonds. Find your phone and call us at 800-314-7003 to get the best in bonds and customer service. We think you'll be pleased with what how we do business. Call the Mesquite Surety Bond Pros at 800-314-7003!

Mesquite Surety Bonds Offer Security To You And Your Clients

Call 800-314-7003! What is a surety bond? A surety bond is a way of bolstering a pledge you have made to discharge a duty or observe regulations. Let’s say you sell retail alcohol within 1000 feet of a school. The Texas Alcohol Commission requires a $10,000 bond for this ($5000 if your than 1000 feet) presumably to discourage you from selling alcohol to minors, but the commission wants to help you strengthen your resolve to adhere to the law so they require you to take out a bond from a bond producer. The bond producer sticks up for you in case of default by taking on the risk themselves and temporarily loaning you the amount you need to cover it. Pro Surety Bond has over 25 years of combined industry experience, searching for moderately priced bonds you can afford, even if your credit isn’t great. Call 800-314-7003!

If you are bidding on public projects for the City of Mesquite you may be required to post a Bid Bond. The Bid Bond guarantees you will be able to provide the Performance Bonds required in the event you are the low bidder. In essence the Bid Bond pre-qualifies you for the work you are bidding on. Not all jobs require bonding but if they do we can assist you with Bid Bonds, and subsequent Performance and Payment Bonds as required by the state. Please call the Contract Bond Team at Pro Surety Bond for more information.

Click Here for Bidding Opportunities for the City of Mesquite

Mesquite, Texas is the 20th most populous city in the state, as well as being a part of the Dallas suburban area. Mesquite was founded in 1878, but unlike so many other 19th century cities in the United States, it was built after the railroad went through. Mesquite prospered mostly as a cotton producing area, but also produced corn, sugar, hay, with the railroad linking the city with the rest of the country. After World War II came the population explosion, with the number of residents rising from 1700 in 1950 to 27,000 in 1960 to 55,000 in 1970. Somebody out there loves Mesquite! Today Mesquite is a Texas hot city with hot summers and a humid subtropical climate, a couple of universities and colleges including Eastfield College and Texas A & M – Commerce, and a small but busy regional airport: Mesquite Metro Airport.

Mesquite is close to Dallas East Texas, thanks to the generous highway system that links it with the rest of the world, and Mesquite wants you to bring your development project or business to their fair city. The city has a development review team that exists to make all aspects of your business move as smooth as possible, and they can point you to where you need to go the inform you of what you need to know. If you’re serious, the team will assign you a manager who will show you all the steps. If you can create jobs or supply capital investment, the city of Mesquite wants to talk to you. Call the Mesquite Surety Bond Pros Today at 800-314-7003!

I’m in the construction industry and have worked for years without bonding. Do I need a performance bond to move to the next level? The answer is yes. There are tons of contractors out there that work their entire lives on small jobs, ones that don’t need bonding. But to really start making the big money you need to get into government contracts. Government contracts however are circumscribed by the Miller Act, which requires all federal building contracts with a budget over $100,000 to be bonded. When you are, you’ll be amazed at how much work opens for you.

What should I look for in a surety bond agent? A surety bond agent is an insurance salesman like at any other insurance firm, but there are things a bond agents needs that don’t fall under their insurance certification. For one, it’s better if your agent is a professional in surety bonds. Yes, your insurance guy down the street can write up a bond, but he is not an expert and has not cultivated the relationships with underwriters that a surety agent should have. Give us a call at 800-314-7003

The Surety Bonds We See Most Commonly in Mesquite, TX