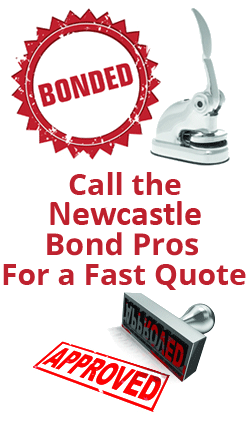 Pro Surety Bond is here to be your surety bond provider. We specialize in all types of Contract and Construction Bonds including Payment and Performance Bonds, Subdivision and Off Site Bonds, Bid Bonds, License and Permit Bonds, Court Bonds, Fidelity Bonds and all types of Miscellaneous Surety Bonds. We're available to take your call at 800-314-7003. When you do you'll realize learn how resourceful our agents can be. Call the Newcastle Surety Bond Pros at 800-314-7003!

Surety Bond Quotes For Any Small Business In Newcastle

Call 800-314-7003! What is a surety bond? A surety bond is a commitment on the part of a surety company, to temporarily loan you money that acts as a guarantee to another party that you will deliver on an arrangement you have agreed to. Say you collect sales tax for your state’s department of revenue. The department really needs more than your word of honor that you will see through to fulfilling your duties, and so they have instituted a surety bond as a way of shoring up your word. You buy the bond from the bond producer, and he promises that he will temporarily loan you the money to back up the guarantee. Pro Surety Bonds has over 25 years of combined industry experience, digging up budget friendly bond rates for all its clientele, including those whose credit is poor. Call 800-314-7003!

If you are bidding on public projects for the City of Newcastle you may be required to post a Bid Bond. The Bid Bond guarantees you will be able to provide the Performance Bonds required in the event you are the low bidder. In essence the Bid Bond pre-qualifies you for the work you are bidding on. Not all jobs require bonding but if they do we can assist you with Bid Bonds, and subsequent Performance and Payment Bonds as required by the state. Please call the Contract Bond Team at Pro Surety Bond for more information.

Click Here for Bidding Opportunities for the City of Newcastle

One Of The Best Small Towns In America

Newcastle is a newcomer to city incorporation, having only reached that place in 1994. It has been a settlement town since the late 1800s, and served as a link to Seattle through the railroad and being a coal region. It was named after the English city of Newcastle upon Tyne because of this affiliation with coal. Today residents love Newcastle, Washington because of its convenience and comforts of the big city, and the coziness of small town living. These days Newcastle ranked 11th out of 522 areas in Washington in terms of per capita, and in 2009 Newcastle was ranked 17th best place to live in the United States.

Newcastle is near one of the best job markets in the United States: Seattle; and as such offers a standard of living and quality of life that is uncommon. It doesn’t stop there though. The city is always trying to outdo itself, and thus it has begun offering incentives to neighborhoods that will allow residents to identify priorities and work to improve them. They may be physical improvements, or they may be something that is a public good for the public at large. Call the Newcastle Surety Bond Pros Today at 800-314-7003!

What are the benefits of a surety bond? One great thing about surety bonds is that the surety company can act as a sort of buffer between you and unjustified claims. Sureties investigate claims and won’t pay unless the claim is justified, so they can offer some protection in that respect. Let’s be clear about one thing, though: you bought the bond, but the party that required it is the real customer by dint of the fact that it probably wouldn’t be bought unless a requirement were in place. In other words, the bond requester needs to be satisfied in the end, and in no legal sense does the surety represent you. Nevertheless it is in the surety’s best interest to minimize indemnities for obvious reasons, and what’s in their best interest can be in your best interest as well.

What other types of bonds exist? There are judicial bonds which address various issues that come up during trial. For instance, there are defendants bonds, which counteract the bond that a plaintiff has produced. If the defendant wants to take possession of a property because he feels confident in his case, he can do so with a bond, but if he is ruled against he will have to indemnify the plaintiffs damages incurred during the trial. Another type of defendant bond, probably the only surety bond that everyone has heard of is the bail bond, which guarantees to the court that a defendant will appear at his trial. Give us a call at 800-314-7003

The Surety Bonds We See Most Commonly in Newcastle, WA