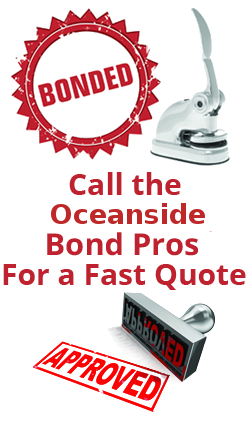 Pro Surety Bond won't rest until we find the surety bond underwriting you need. We specialize in all types of Contract and Construction Bonds including Payment and Performance Bonds, Subdivision and Off Site Bonds, Bid Bonds, License and Permit Bonds, Court Bonds, Fidelity Bonds and all types of Miscellaneous Surety Bonds. You haven't finished pricing your surety bond until you call 800-314-7003 Speak to someone who cares about getting you a great deal. Call the Oceanside Surety Bond Pros at 800-314-7003!

A Oceanside Surety Bond is a Hedge against Disaster

Call 800-314-7003! What exactly is this thing for? It’s our most common question, and we think it warrants an answer here. In response, we usually tell them that a surety bond offers a guarantee to another party that you are good for your word. Take the example of an auction company. There are a lot of regulations related to the handling of money and regulators are serious about them being followed. To make sure you do they make you take out a surety bond. The surety bond is a way of making your word good as gold, as it requires you to put up money to make it so. Pro Surety Bond puts its money where its mouth is every day by producing the best priced surety bonds we can find, even if your credit isn’t that good. Call 800-314-7003!

If you are bidding on public projects for the City of Oceanside you may be required to post a Bid Bond. The Bid Bond guarantees you will be able to provide the Performance Bonds required in the event you are the low bidder. In essence the Bid Bond pre-qualifies you for the work you are bidding on. Not all jobs require bonding but if they do we can assist you with Bid Bonds, and subsequent Performance and Payment Bonds as required by the state. Please call the Contract Bond Team at Pro Surety Bond for more information.

Click Here for Bidding Opportunities for the City of Oceanside

Oceanside is the "Capital of Sun and Surf"

Oceanside is a part of what is called the tri city area along with Carlsbad and Vista, and as such it’s sort of the link between San Diego and LA, but it’s also known for two other things: Marine Corp Base Camp Pendleton which is the west coast’s largest training facility 125 acres, and the surfing/beaches with its famous 2000 foot long pier. The base needs no explanation; it opened in 1942 and was responsible for its rapid growth after the war. The latter is world famous for it’s surf and six mile stretch of beach. One of the more charming aspects of Oceanside is its lack of traffic. It’s the kind of place where you could get along without a car if you had to, and residents like it that way. But it’s not all surf and sun. For a city of only about 170,000 Oceanside has a surprisingly large number of museums, including the Oceanside Museum of Art, the Oceanside Historical Museum, the Model Train Museum, the Museum of Making Music and the Heritage Park Village Museum. The Harbor has tons of eateries along with something you won’t get with most of your meals: whale watching. One more thing: if you want to live in Oceanside you better be a Padres fan. You don’t have to be a fan of baseball, but let’s just say if you mention the Padres in a way that isn’t respectable, you might find someone in your face discussing your “attitude problem”. Just sayin’.

Oceanside’s ideal location with I-5, I-76 and I-78 running right through the city makes it an ideal place for a business. Pendleton was the biggest employer for the longest time, but though that is no longer the case, you’ll still see uniforms all over the place. Today he biggest employers in Oceanside are the Tri-City Medical Center with about 2000 employees, the City of Oceanside with 1000 and Mira Costa College with 1000 employees. The Economic Development’s mission is to empower developers, work with business relocation brokers to help outside developers get a foot hold in the city, and work on expanding current business in Oceanside. Thanks to these efforts, Oceanside has a robust and diverse business climate which incorporates manufacturing, distribution, tourism and agriculture. Call the Oceanside Surety Bond Pros Today at 800-314-7003!

Now that it’s time to get going on your business in Oceanside, you will probably find that there is a bond requirement in the process of getting a license. Nearly every industry needs a surety bond in order to get a license, simply because every industry has regulations of some sort. Are you a fruit and vegetable producer? Are you a foreclosure consultant? Are you a financial planner? These are only three example, but think of the many industries in California that need a surety bond. Pro Surety Bond has over 25 years of combined industry experience tracking down the most competitively priced bond premiums for our vast clientele and agents are waiting right now to do the same for you.

We won’t quibble with you, we know you don’t find surety bonds as exciting as we do. The fact remains that you do need one so you may as well get off on the right foot. Naturally, we think that you’ve already found the right provider, but it’s your choice. However, there are a few things you should think about before settling on one. First is will your provider supply you with the most competitively priced bond he can find, and will he present it to you with unparalleled passion and matchless integrity? Pro Surety Bond surpasses all the competition on both counts, and our loins are girded to do the same for you. Give us a call at 800-314-7003

The Surety Bonds We See Most Commonly in Oceanside, CA