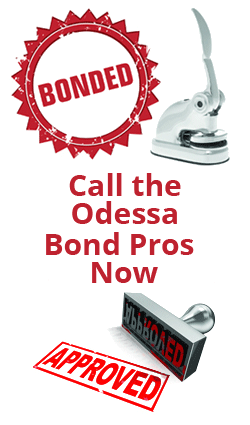 Make sure you get the best price on your surety bond by calling Pro Surety Bond. We specialize in all types of Contract and Construction Bonds including Payment and Performance Bonds, Subdivision and Off Site Bonds, Bid Bonds, License and Permit Bonds, Court Bonds, Fidelity Bonds and all types of Miscellaneous Surety Bonds. You haven't called everyone until you call 800-314-7003. You will be surprised to discover how great our prices are. Call the Odessa Surety Bond Pros at 800-314-7003!

No More Need To Shop Around For Your Odessa Surety Bond

Call 800-314-7003! Why do I need a surety bond? You probably need one because it is a requirement, but what does the surety bond do? A surety bond is an agreement between you, the party that has the requirement that makes you buy the bond, and the bond company itself. In effect, the licensing body for your industry wants a vow from you that you will follow the regulations that rule over your industry, and they want you to back up that vow financially in the form of a surety bond. You buy the bond from the surety producer to cover the governmental licensing body, and the surety promises to make “sure” that the guarantee is upheld, in the form of a short term loan for you if necessary. Pro Surety Bond has over 25 years of combined industry experience, making things happen by tracking down the best rates it can find for all its clients, poor credit clients included. Call 800-314-7003!

If you are bidding on public projects for the City of Odessa you may be required to post a Bid Bond. The Bid Bond guarantees you will be able to provide the Performance Bonds required in the event you are the low bidder. In essence the Bid Bond pre-qualifies you for the work you are bidding on. Not all jobs require bonding but if they do we can assist you with Bid Bonds, and subsequent Performance and Payment Bonds as required by the state. Please call the Contract Bond Team at Pro Surety Bond for more information.

Click Here for Bidding Opportunities for the City of Odessa

Odessa is a city in Ector County, and is the 29th most populous city in the state of Texas. The city was named after, in case you hadn’t guessed, Odessa, Ukraine, presumably because of the shortgrass prairies that resemble the steppe landscape of the Ukraine. It is not clear how the namer of the city, whoever he is, would know anything about Odessa, Ukraine or if it is surrounded by short grass. In any event, Odessa got its start as a watering hole for cattle and the Texas and Pacific Railway. In 1927 several oil fields were discovered, and the effect was such that the population shot up from 750 to over to 5000 in the year 1925 to 1929. In fact Odessa’s history is punctuated with booms and busts; when you’re in the oil business it comes with the territory.

Odessa’s goal is to make the community vibrant again, by offering inexpensive but quality housing, by creating a healthy learning, working and living environment, and creating more ways to earn a better living for everyone, including those in the low to moderate income bracket. Odessa officials believe they can do this by demonstrating that their city is in an excellent location in Texas to help businesses grow and thrive. It has a strong infrastructure, an educated and motivated workforce, and an ample supply of inexpensive energy to meet the needs of just about any industry. Odessa officials believe that West Texas is on the cutting edge of the 21st century, areCall the Odessa Surety Bond Pros Today at 800-314-7003!

What different types of surety bonds are there? Quite a few actually, and they apply to all sorts of situations. One interesting type of bond you’ve probably never heard of is the public official bond, which is a collective name that applies to a number of related bonds. Some public official bonds are required of elected officials, to protect the public from negligence on the part of the official for instance. All the way down the ladder are notary publics, who are public officials technically, and they have to take out a notary bond to protect the State from wrongful notarizing on the part of a notary public.

We Have Advanced Technologies For Odessa Surety Bonds

Do I need collateral to secure my surety bond? Typically no, but like so many other things it depends on the circumstances. Sometimes collateral is used to secure a surety bond if the applicant is having problems maintaining bonding capacity, either because of poor credit or changes in underwriting standards, for instance. Sometimes collateral will change during the term of the bond, for instance with a court bond when circumstances in a court case change. In any event, if collateral is needed to secure a surety bond, the more liquid the better. Give us a call at 800-314-7003

The Surety Bonds We See Most Commonly in Odessa, TX