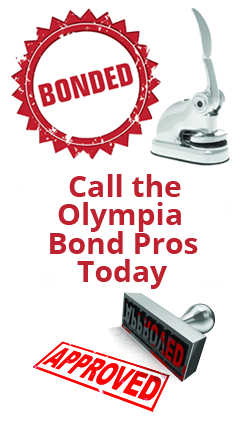 Call one of the top names in the business: Pro Surety Bond. We specialize in all types of Contract and Construction Bonds including Payment and Performance Bonds, Subdivision and Off Site Bonds, Bid Bonds, License and Permit Bonds, Court Bonds, Fidelity Bonds and all types of Miscellaneous Surety Bonds. It’s so simple just calling 800-314-7003 to speak to a bond agent. We can’t sleep at night unless we find you the surety bonding you need. Call the Olympia Surety Bond Pros at 800-314-7003!

Call And Speak With Your Next Olympia Surety Bond Counselors

Call 800-314-7003! What is a surety bond? The answer to that question depends on what type of bond you need, but it’s safe to say that surety bonds offer a way for someone you don’t know to trust you. If you are in need of a business license, the governmental body that oversees your industry will want you to take out a bond as a way of enforcing the laws and regulations of that industry, thereby protecting the consumer in the process. Surety bonds are three way agreements: one is you, the bond purchaser aka the principal, the government aka the obligee and the surety itself aka the obligor. It is the surety that enforces the promise you have made to the government to follow regulations. Pro Surety Bond has over 25 years of combined industry experience, running down the best premiums it can find in its network of underwriters, and we do can do it for you, good credit or bad. Call 800-314-7003!

If you are bidding on public projects for the City of Olympia you may be required to post a Bid Bond. The Bid Bond guarantees you will be able to provide the Performance Bonds required in the event you are the low bidder. In essence the Bid Bond pre-qualifies you for the work you are bidding on. Not all jobs require bonding but if they do we can assist you with Bid Bonds, and subsequent Performance and Payment Bonds as required by the state. Please call the Contract Bond Team at Pro Surety Bond for more information.

Click Here for Bidding Opportunities for the City of Olympia

The Capital Of The State Of Washington

At the southernmost location on the Puget Sound is found the city of Olympia, Washington. The first settlers here were Lathrop Smith and Edmund Sylvester, and the town site was named Smither or Smithers later Smithfield. After the town was platted by Sylvester and it was then given the name Olympia in observance of the great view of the Olympic Mountains nearby. Olympia is the state capital, but there is more to it than that. Olympia offers a variety of shopping, dining and entertainment, with both national and local brands featured. The weather here is fairly mild in the winter compared to other parts of the state, and the summers are warm but tolerable. In so many other cities the people are dying to get out and into the mountains, but Olympia is a city of parks, with dozens spread across the city for the benefit of the citizens.

Being the state capital, the state government is the greatest economic force in the city, without a doubt. This is of course a great boon to the residents, as governmental jobs are generally stable and long term, and the number employed is nearly 25,000. Still, the economic development council in Olympia works with government and local businesses to create investment opportunities that it hopes will promote the long term economic success, for both business and residents. Other large employers are the City of Olympia government with about 15000, Providence St Peter Hospital with about 3000 and the tribal government with about 2000. Call the Olympia Surety Bond Pros Today at 800-314-7003!

Do I need a surety bond or can I secure myself with something like a letter of credit? In other times letters of credit were more common and more competitive than surety bonds, but the environment has changed and it has been found that surety bonds free up a lot more capital. See, sureties do at least a credit check and size up your risk potential before selling you the bond, and that’s why can offer surety bonds at pennies per dollars of coverage: they have already determined that it’s not likely you will default. With letters of credit, you are dealing with a bank, and collateral, and an institution that is not in the surety business, which means your needs are sort of an afterthought. With surety bonds, you will be dealing with a professional surety provider, who ideally knows your industry and its surety needs and knows you as well and knows your needs.

What does being bonded mean to potential clients? You’ve probably seen the term thrown around, “bonded and insured,” or probably “licensed, bonded and insured.” The terms often occur together but they indicate different things. Being insured indicates that, for instance if a maintenance business has an employee working at your house, that if that employee is injured he will not be making a claim against your homeowners insurance, but will file a claim against his employer. In general, insurance indicates that you are responsible. Bonding also indicates that you are responsible, but if you are bonded it shows that your customer is covered in case the employee does damage to you. Give us a call at 800-314-7003

The Surety Bonds We See Most Commonly in Olympia, WA