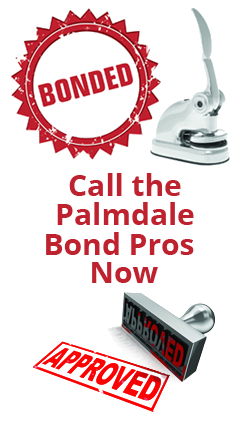 Call Pro Surety Bond for the best surety bonds rates, after you've called everyone else. We specialize in all types of Contract and Construction Bonds including Payment and Performance Bonds, Subdivision and Off Site Bonds, Bid Bonds, License and Permit Bonds, Court Bonds, Fidelity Bonds and all types of Miscellaneous Surety Bonds. Call 800-314-7003 for a free bond quote and complete surety bond information. Speak to a knowledgeable representative today! Call the Palmdale Surety Bond Pros at 800-314-7003!

Protect Your Reputation with a Palmdale Surety Bond

Call 800-314-7003! I just want to open a business, why do I need a surety bond? This is a common question and worthy of a good answer here. In response, we usually tell them that surety bonds show that you are reliable and can be trusted. Take the example of a car wash business. There are regulations that deal with environmental concerns and regulators want them followed. To make compliance a little more irresistible they have created the requirement of the surety bond, which tells the public that that you are acting with only the best of intentions; you wouldn’t sacrifice your own money if you were not trustable. Pro Surety Bond shows it is trustable every day by getting only the best deals on bonds for its clientele, and not only for the good credit clients, but those with poor credit as well. Call 800-314-7003!

If you are bidding on public projects for the City of Palmdale you may be required to post a Bid Bond. The Bid Bond guarantees you will be able to provide the Performance Bonds required in the event you are the low bidder. In essence the Bid Bond pre-qualifies you for the work you are bidding on. Not all jobs require bonding but if they do we can assist you with Bid Bonds, and subsequent Performance and Payment Bonds as required by the state. Please call the Contract Bond Team at Pro Surety Bond for more information.

Click Here for Bidding Opportunities for the City of Palmdale

Palmdale is the "Aerospace Capital of the United States"

Palmdale, originally named Palmenthal, was the first settled village in the area (1866), mostly by German and Swiss immigrants from the Midwest. Many ask how it got its name because it’s not located near any palm trees. According to local rumor, the city got its name because the settlers had never seen a palm tree, and mistook the Joshua Trees for palms and a city name was born. Palmdale was the first city to incorporate in Antelope Valley, shortly after the wild antelope the area is named after vanished. Agriculture became the mainstay of most of the population, but in 1933 the military established Muroc Air Base, now known as Edwards Air Force Base. In 1953 Lockheed established a plant which morphed into an aerospace facility, making Palmdale the “Aerospace Capital of America.” Palmdale experienced rapid growth over those years, and this made it prime for get rich outside investors. Regrettably, housing prices fell as quickly as they did going up during the recession. Yet there is still a lot that’s great about the place, like the Milligan Family Fun Center, Blackbird Airpark, the Cedar Center with community artists doing what they do, and the Antelope Valley fair.

The aerospace industry remains the mainstay of the modern Palmdale economy, with Lockheed Martin employing 3700 and Northrop Grumman employing 2100, making these two the top employers in the city. But city officials aren’t resting on their laurels. The economic development board offers special breaks for all companies who are moving house. Officials hope that the Antelope Valley Enterprise Zone and the Palmdale Federal Foreign Trade Zone will do the trick. In fact a number of internationally top notch companies have set up or moved shop to Palmdale, including Delta Scientific, maker of high strength vehicle barrier systems and US Poles, maker of, you guessed it, poles, street lighting poles to be specific. Most of these businesses are anchored in the Fairway Business Park and the Palmdale Trade and Commerce Center. Call the Palmdale Surety Bond Pros Today at 800-314-7003!

It’s understood that not everyone can get into surety bonds as much as we do, but you have apparently been asked to take one out so you should familiarize yourself about how to go about it. You can probably guess that we think we should be your surety bond provider, but it’s your decision on which bond provider is right for you. We do however have a lot of experience and think there are a couple of thing to keep in mind when choosing on. First, will your bond provider reserve no effort in hunting down the most popularly priced premiums he can find, and will he carry through on this by treating you with respect and decorum? Pro Surety Bond triumphs over all other competitors in both efforts, and we’re willing to show that we can do the same for you. Give us a call at 800-314-7003

The Surety Bonds We See Most Commonly in Palmdale, CA