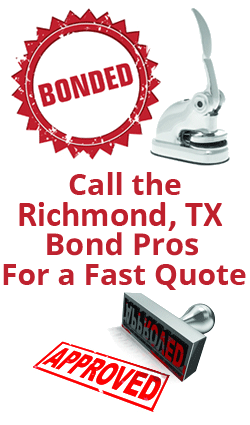 Call Pro Surety Bond for your next bond requirement.  We specialize in all types of Contract and Construction Bonds including Payment and Performance Bonds, Subdivision and Off Site Bonds, Bid Bonds, License and Permit Bonds, Court Bonds, Fidelity Bonds and all types of Miscellaneous Surety Bonds. to speak to a bond resource that can help you. 800-314-7003 Many say they enjoy speaking with our professionals. Call the Richmond Surety Bond Pros at 800-314-7003!

The Only Richmond Surety Bond Agency You Need to Call.

Call 800-314-7003! What is a surety bond? Surety bonds exist, among a number of reasons, to allow the public to trust you while doing business with you and with the government. Let’s say you are a Texas STAR Program administrator. Since you are working with Medicaid funds, both the public and the government need to be protected from the few bad seeds in that business, so the government makes you take out a surety bond as an incentive to encourage you to do business honestly and maintain the private medical records of the clients. The surety can make sure a valid claim is paid because it has the financial backing to make a short term loan to the business to pay that claim. Pro Surety Bond has over 25 years of combined industry experience, and we don’t want to stop now. Call us even if you’re unsure whether you can be bonded. We have underwriters who might be able to work with you. Call 800-314-7003!

If you are bidding on public projects for the City of Richmond you may be required to post a Bid Bond. The Bid Bond guarantees you will be able to provide the Performance Bonds required in the event you are the low bidder. In essence the Bid Bond pre-qualifies you for the work you are bidding on. Not all jobs require bonding but if they do we can assist you with Bid Bonds, and subsequent Performance and Payment Bonds as required by the state. Please call the Contract Bond Team at Pro Surety Bond for more information.

Click Here for Bidding Opportunities for the City of Richmond

A Charming Past. A Soaring Future

Richmond is a city in Fort Bend County and it is the 197th most populous city in the state of Texas. The site that would become Richmond was settled originally by a group of about 15 men who built a log fort which would become the nucleus of the community. The city was named after Richmond, England and was incorporated under the republic of Texas in 1837. Before the civil war the town was a cattle empire that sprouted up between the Brazos and Colorado Rivers. The city almost died off when the railroad bypassed Richmond and went through Rosenberg instead. Because of this it was believed that Richmond would never be anything more than an agricultural center, but in the 1920s oil was discovered, and the rest is history as they say. Today Richmond, Texas is in important part of the Houston—the Woodlands—Sugar Land metropolitan area.

All of the economic activities for the City of Richmond, Texas are supervised by the Development corporation of Richmond, which was created by the city under the Texas development Corporation Act. Its purpose is to promote, assist and enhance economic and community development for the city. Over the years the cities of Richmond and Rosenberg, originally economic opponents, have grown together literally as their respective populations have grown and figuratively as they have come to share common economic concerns. Today they cooperate often in development and planning projects.  Call the Richmond Surety Bond Pros Today at 800-314-7003!

What is a subdivision bond? Subdivision bonds, also commonly called improvement or site improvement bonds, cover local governments against incomplete or shoddy workmanship on infrastructure modification and construction. Most of the time infrastructure construction for subdivisions is paid for by the contractor, but it will eventually become the property and responsibility of the taxpayers, so it’s in the best interest of the local government to make sure things are done properly, and that means surety bond in most cases.

I’ve had bonding for my construction business for years, now I can’t get what I need. What happened? Lots of things can happen, many of which have nothing to do with the integrity of the bond purchaser. Reasons include: 1. Sometimes states change bonding amounts, sometimes dramatically. 2. Economic downturns can play havoc with credit markets or any other kind of market. The surety bond market doesn’t exist in a vacuum, and can fall victim to the same forces. 3. Changes in your industry in your area, like a dramatic spike in claims, can have a serious effect as well. Give us a call at 800-314-7003

The Surety Bonds We See Most Commonly in Richmond, TX