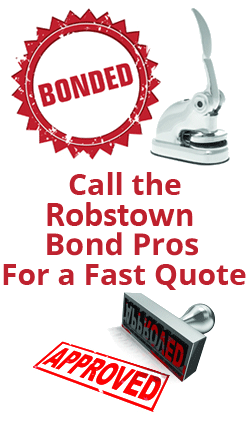 Pro Surety Bond professionals are here to give you the best bond pricing they can find. We specialize in all types of Contract and Construction Bonds including Payment and Performance Bonds, Subdivision and Off Site Bonds, Bid Bonds, License and Permit Bonds, Court Bonds, Fidelity Bonds and all types of Miscellaneous Surety Bonds. A bond agent can give you the information you need at 800-314-7003 They can help you make a decision. Call the Robstown Surety Bond Pros at 800-314-7003!

Call 800-314-7003! What is a surety bond? A surety bond can, among other things, protect the public from irresponsible or accidental behavior on the part of businesses and public officials. If you are, say, a notary public, you are a third party public official charged with making sure that there is a record of parties signing a legal document. Occasionally notaries make mistakes, and those mistakes need to be covered. The government will want a notary to have a surety bond to do just that, because only a surety company has the financial reputation to make sure a claim is paid. The surety can offer a short term loan to the notary to cover the claim. Pro Surety Bond has over 25 years of combined industry experience, and we can’t stop getting more. Call us even if you think your bonding will be too expensive. We have underwriters who know the market well. Call 800-314-7003!

If you are bidding on public projects for the City of Robstown you may be required to post a Bid Bond. The Bid Bond guarantees you will be able to provide the Performance Bonds required in the event you are the low bidder. In essence the Bid Bond pre-qualifies you for the work you are bidding on. Not all jobs require bonding but if they do we can assist you with Bid Bonds, and subsequent Performance and Payment Bonds as required by the state. Please call the Contract Bond Team at Pro Surety Bond for more information.

Click Here for Bidding Opportunities for the City of Robstown

At The Crossroads Of South Texas

Robstown is a city in Nueces County and it is the 198th most populous city in the state of Texas. Robstown was named after Robert Driscoll the lawyer, banker and rancher who helped in the creation of Corpus Christi, but was started by one George Paul of Washington, Iowa at the junction of the Texas Mexican and the Brownsville and Mexican railroads. It was originally a truck farming area but in 1930 oil was discovered nearby and the population went from about 1000 in 1920 to over 6000 in 1940. Today Robstown is known as the birthplace of Texas Hold’em poker.

Robstown city officials and the Robstown Improvement Development Corporation believe that Robstown can create an environment in which businesses can thrive, both those already in business here and for relocations. It has a business friendly workforce that is flexible and productive, many local opportunities for education including the highly recognized Robstown Independent School District, it’s highly accessible to major highways including highway 70 and interstate 69 and it has a number of state, county and local governmental tax incentives.  Call the Robstown Surety Bond Pros Today at 800-314-7003!

What is a bond line? A bond line, also known as bonding capacity or bond limit, is the pre-approved dollar amount granted to a building contractor. There are two kinds of bond line: the single and the aggregate bond line. The single bond line is the maximum amount allowed on a particular project, whereas the aggregate amount is the total amount allowed for all jobs totaled. They are not same however, because your bond underwriter takes into account your history of building jobs and won’t necessarily green light a single project that uses all your aggregate bonding because they have to take into account your ability to scale jobs.

Scaling jobs is an important indicator of a contractors’ business strength, and underwriters know that a company that does typically jobs around $1 million won’t suddenly be able to take on a project of $5 million. This is because the latter project isn’t simply a matter of multiplying what you were doing before by five. Increasing the size of your jobs and business requires business acumen, and often when businesses scale the owners can lose control. They do not reckon the restructuring that might be necessary or the number of employees needed to complete tasks. Give us a call at800-314-7003

The Surety Bonds We See Most Commonly in Robstown, TX