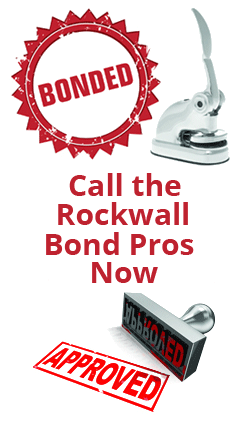 Call Pro Surety Bond now for some of the best rates on premium surety bonds. We specialize in all types of Contract and Construction Bonds including Payment and Performance Bonds, Subdivision and Off Site Bonds, Bid Bonds, License and Permit Bonds, Court Bonds, Fidelity Bonds and all types of Miscellaneous Surety Bonds. Make us earn our money by calling 800-314-7003 and asking for a free bond quote. We take pride in our work. Call the Rockwall Surety Bond Pros at 800-314-7003!

Call 800-314-7003! What is a surety bond? Let’s use an example to illustrate how surety bonds work. Say you own a beer distributor business. The regulators who issue the licenses for your industry have rules on how you handle the beer and pay the taxes etc; and to encourage you to adhere to those regulations, they require that you purchase a surety bond before you receive a license. In turn the surety company makes sure that your promise to obey the regulations is upheld, even if they have to forward a short term loan for you. Pro Surety Bond has over 25 years of industry experience, and we can make it work for you. Call 800-314-7003!

If you are bidding on public projects for the City of Rockwall you may be required to post a Bid Bond. The Bid Bond guarantees you will be able to provide the Performance Bonds required in the event you are the low bidder. In essence the Bid Bond pre-qualifies you for the work you are bidding on. Not all jobs require bonding but if they do we can assist you with Bid Bonds, and subsequent Performance and Payment Bonds as required by the state. Please call the Contract Bond Team at Pro Surety Bond for more information.

Click Here for Bidding Opportunities for the City of Rockwall

Rockwall is a city in Rockwall County, and it is the 77th most populous city in the state of Texas. The rather unusual name for the city comes from the first settlers who arrived in 1850, one of whom was named T U Wade. Mr Wade began drilling oil wells, in hopes of becoming rich, when he came across a large mass of underground rock walls that looked curiously man made. They were in fact created naturally, but the name stuck and after a vote the city was incorporated in 1854. Today Rockwall is a suburb of Dallas, but the city maintains its historic downtown main street feel.

The Rockwall Economic Development Corporation is sworn to provide the economic growth of the city of Rockwall by enticing corporations to relocate to their great city, and also by helping those already established here to flourish and expand. Rockwall has a Technology Park that uses land incentives and site development grants to do these things. The park is over 400 acres and has already drawn a number of high tech companies and expansions manufacturing interests. Names include SPM Manufacturing, Bimbo Bakery among others.  Call the Rockwall Surety Bond Pros Today at 800-314-7003!

What are court bonds? Court bonds, also called Judicial bonds, or Appeal Bonds, serve and protect the interests of a party in litigation if they have an appeal, injunction, lien or other restraining legal action against them. In a legal proceeding, the surety company guarantees that the plaintiff or injured party will be covered and that their seized assets or disputed claims will remain secure during the time of the trial.

We're One of Your Best Options on Rockwall Surety Bonds

You don’t always need a bond, and many litigants use cash or their own credit in place of the bond. However, courts are not in the cash handling business and do not have the clerical wherewithal to handle large amount. In many cases they will only accept a surety bond. Remember also that because your cash is not their top concern, sometimes courts take a long time to release your funds or securities. And when they’re holding it they will not pay interest. Give us a call at 800-314-7003

The Surety Bonds We See Most Commonly in Rockwall, TX