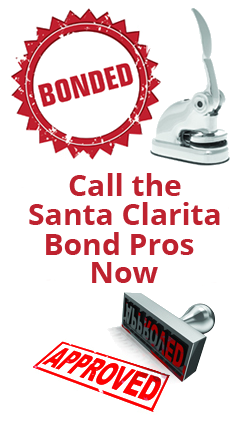 For matchless customer service call Pro Surety Bond today. We specialize in all types of Contract and Construction Bonds including Payment and Performance Bonds, Subdivision and Off Site Bonds, Bid Bonds, License and Permit Bonds, Court Bonds, Fidelity Bonds and all types of Miscellaneous Surety Bonds. There's no reason to not pick up the phone and dial 800-314-7003. Our staff of bond counselors enjoy talking bonds to anyone. Call the Santa Clarita Surety Bond Pros at 800-314-7003!

The Only One Real Option for Santa Clarita Surety Bonds

Call 800-314-7003! Each and every day we get phone calls asking us what surety bonds are, so we usually give an example like that of a finance broker. Finance brokers handle other people’s money and deal with sensitive information, and there are regulations which cover these transactions. In order to get you to obey those regulations, they require that you take your surety bond as a type of collateral that backs up your word where it would be a difficult to do so. Pro Surety Bond backs up its word every day by digging up the lowest priced surety bond premiums it can find in its network of underwriters, and we do it for those with poor credit as much as those with good credit. So give us a call for a fast and free quote. Call 800-314-7003!

If you are bidding on public projects for the City of Santa Clarita you may be required to post a Bid Bond. The Bid Bond guarantees you will be able to provide the Performance Bonds required in the event you are the low bidder. In essence the Bid Bond pre-qualifies you for the work you are bidding on. Not all jobs require bonding but if they do we can assist you with Bid Bonds, and subsequent Performance and Payment Bonds as required by the state. Please call the Contract Bond Team at Pro Surety Bond for more information.

Click Here for Bidding Opportunities for the City of Santa Clarita

Santa Clarita is Where the Good Life Takes You

Santa Clarita, not to be confused with Santa Clara, is a relatively late newcomer to city incorporation, having only done so in December of 1987. Some people wanted to name it City of the Canyons, but sensible heads prevailed, to great benefit many say. Santa Clarita is often associated with Six Flags Magic Mountain amusement park, though the park itself is outside city limits. It features some of the world's fastest roller coasters and free fall rides, making it the vacation destination for people hundreds of miles around. Santa Clarita is a two wheelers paradise, both for the kind with peddles and the kind with engines. Santa Clarita’s paseo system means there are miles and miles of trails exclusively for runners, hikers and cyclists, and they run through some of the most breathtaking vistas found in Southern California. Santa Clarita also has numerous motorcycle clubs, partly because of the great weather, but otherwise there are just plenty of roads with great views to ride down and so many fanatics wanting to do it. Santa Clarita is a hot spot for film and television production which makes sense given that it's so beautiful and so near Hollywood. In terms of the arts, Cal Arts is one of the premier are institutions in the country, and the school itself hosts a massive music festival of features everything from local musicians to a Tibetan singers and Polynesian dancers.

Since 2007 the city of Santa Clarita has been offering business tax incentives to companies moving from outside the city. To entice these companies Santa Clarita negotiated with the Federal government to make industrial and commercial areas in northern and western Santa Clarita federally recognized as an enterprise zone. To meet the new demand the zone created additional warehousing and office space was also constructed. Currently the enterprise zone covers 97% of commercial, business and industrial zoned land within the city of Santa Clarita. As a result several companies have moved their operations here including True Position Technologies, Salt Creek Grille, Condomman.com, and Trigg Laboratories. This in turn has led to the growth of home building, much to the benefit of the Santa Clarita economy. The largest employers in Santa Clarita include Six Flags Magic Mountain with 4500 employees, Princess Cruises with 1600 employees, Henry Mayo Newhall Memorial Hospital with about 1400 employees and Quest Diagnostics with about 850.Call the Santa Clarita Surety Bond Pros Today at 800-314-7003!

Making a go into business in Santa Clarita is a pretty sure bet, but first there is the matter of a surety bond. Almost every industry has some kind of regulation so it's very likely that yours has one as well. Do you own a nurse's registry? The people of the state of California will want protection from any potential fraud or misstatement on your part. Do you own a business that collects sales tax? The department of taxation will want some kind of guarantee that you will make your deposits properly. Are you a foreclosure consultant? There are regulations which govern the qualifications of those who practice in that industry. Your business is likely not at all related to the industries just mentioned, but they all have one thing in common with yours: they require a surety bond to do business. Pro Surety Bond has over 25 years of combined industry experience fulfilling bond requirements for each and any type of surety bond need.

You don't have a lot of time to price a surety bond, but since you need one there is no reason you should not do it right the first time. Naturally, we think we would make a great bond provider for you but we understand if you would like to look around a little more. However we think you should think about a couple of things before you make the jump in choosing one. The first is will your provider go all out in tracking down the most budget appealing premiums on your surety bond that he can find, and will he execute the task by providing a first rate customer service experience? Pro Surety Bond has been doing both of these things and many others for each of our clients, and you're just one call away from allowing us to do the same for you. Give us a call at 800-314-7003

The Surety Bonds We See Most Commonly in Santa Clarita, CA