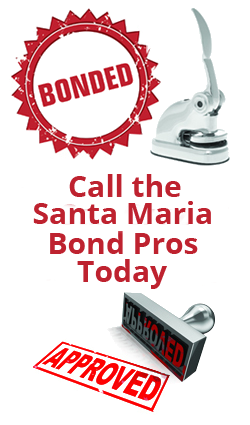 Surety bonds are the only thing we know so call Pro Surety Bond for the best rates. We specialize in all types of Contract and Construction Bonds including Payment and Performance Bonds, Subdivision and Off Site Bonds, Bid Bonds, License and Permit Bonds, Court Bonds, Fidelity Bonds and all types of Miscellaneous Surety Bonds. You cannot make a better decision than calling 800-314-7003. Our agents live to educate our clients. Call the Santa Maria Surety Bond Pros at 800-314-7003!

Call 800-314-7003! Lots of people need surety bonds though hardly anyone knows what they are, and that's why the most common question we get is ‘what is this surety bond for?’ We usually tell them that a surety bond offers a guarantee, a way of vouching for yourself. Say you're a farm labor contractor. There are labor regulations which cover this industry, but how do regulators get you to follow them? They require you to take out a surety bond, which is essentially a way for you to put up some of your own money, money that can be forfeited, to show that you are on the up and up. Pro Surety Bond demonstrates that it's on the up and up every day when it supplies its clientele with the most conservatively priced bonds it can find in its network of underwriters. And don't worry if your credit has seen better days, we have a package for just about everyone. Call 800-314-7003!

If you are bidding on public projects for the City of Santa Maria you may be required to post a Bid Bond. The Bid Bond guarantees you will be able to provide the Performance Bonds required in the event you are the low bidder. In essence the Bid Bond pre-qualifies you for the work you are bidding on. Not all jobs require bonding but if they do we can assist you with Bid Bonds, and subsequent Performance and Payment Bonds as required by the state. Please call the Contract Bond Team at Pro Surety Bond for more information.

Click Here for Bidding Opportunities for the City of Santa Maria

Santa Maria is the Barbecue Capital of California

When California gained statehood in 1850 it was not long before the richness of the soil became legendary, making it one of the most productive agricultural centers in the United States. Santa Maria got its start as a town named Grangerville and was later renamed Central City, but there was already a Central City in Colorado and the mail destined for the California version ended up their instead. So it was decided a name change was in order. Oil speculating began in 1888 and relatively large reserves were discovered in the large Orcutt Oil Field around 1900. Even richer fields were discovered in 1934 which led to a massive boom in Santa Maria’s population and economic health. By 1957 there were more than 1700 oil wells in operation in the Santa Maria Valley. Santa Maria today still has its small town feel but with the advantages only a big town can offer. It is close to beaches and other outdoor activities including hiking and biking, and you can do this stuff year round given that the temperature tops out at about 75°and the average low is around 50°. Unfortunately housing prices are as big as the city is a great but residents feel that every penny spend as well spent.

Agriculture remains a large part of the economy of Santa Maria. The extraordinary richness of the soil has been recognized since the 19th century and today supports a wide variety of crops including strawberries, wine grapes, celery, lettuce, squash, cauliflower among many more. There are even grasslands to support cattle ranching. In recent years the city has been trying to cash in on some of the vineyard winery tour trade because it is centrally located to both Santa Ynez and Foxen Canyon areas of Santa Barbara County, and San Luis Obispo counties Edna Valley and Arroyo Grande wine country. To make sure that Santa Maria does not become too reliant on one industry, in recent years it has tried to add retail and other industries to its economy, including aerospace, communications, high tech research and development, energy production, military operations, and manufacturing. There is even a small oil operation remaining. The largest employers in Santa Maria include Vandenberg Air Force Base within 6600 employees, Santa Maria Bonita school district with 1800 employees, Marian Regional Medical Center with about 1500 employees and Alan Hancock college with nearly 1200 employees.Call the Santa Maria Surety Bond Pros Today at 800-314-7003!

Earning a good living owning your own business in Santa Maria is a pretty sure bet, but when you're applying for a business license here you can expect that a surety bond will be required. Do you sell travel business discount programs? If so the public will want to be protected from fraud on your part. Does your business sell tobacco products? There are numerous regulations that govern the sales and tax collection on tobacco products. Are you a waste tire hauling? There are regulations that pertain to how you dispose of those tires. Even if your business is like none of the above, this still a high likelihood that you will need a surety bond just like they do. Pro Surety Bond has over 25 years of combined industry experience working with the types of bonds mentioned above, and we're sure could we can do the same for you.

Get the Protection That Only a Santa Maria Surety Bond Offers

We realize that buying a surety bond isn't the center of your universe like it is ours, and would understand if you told us you found it boring. Even though we would love the opportunity to be your provider, we know it's your decision to make and we respect that. Nevertheless, you are being asked to purchase one so it's a good idea to get started on the right foot. We usually suggest that you ask yourself before settling on a provider whether the provider will go beyond call of duty in coming up with the most competitively priced surety bond premiums he can find, and can he pull it off with honesty and determination? Pro Surety Bond overtakes the competition in these cases and in many other respects as well. We'd love for you to give us the opportunity to prove it to you. Give us a call at 800-314-7003

The Surety Bonds We See Most Commonly in Santa Maria, CA