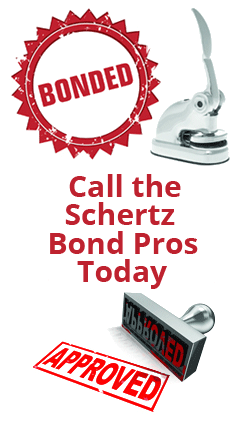 Contacting Pro Surety Bond now will allow you get your bond underwriting at some the best rates. We specialize in all types of Contract and Construction Bonds including Payment and Performance Bonds, Subdivision and Off Site Bonds, Bid Bonds, License and Permit Bonds, Court Bonds, Fidelity Bonds and all types of Miscellaneous Surety Bonds. 800-314-7003 is the only number you need when purchasing surety bonds. Why wait any longer? Pick up the phone! Call the Schertz Surety Bond Pros at 800-314-7003!

Call 800-314-7003! What is a surety bond? At its most simple, a surety bond is a guarantee. Let’s say you own a debt management service. In that business a lot of sensitive data is being handled, and there are regulations in place to guide you in how to handle it. The government would like a little more something than a handshake from you that you will obey the regulations, so they require a surety bond. A surety bond is a promise from a surety company that they will assume the risk of making sure that any penalties incurred by the debt management service business will be paid, in the short term by the surety itself. In reality it is a short term loan to the debt management company. Pro Surety Bond has over 25 years of combined industry experience, and we’re angling for another 25. Call us even if your credit isn’t great. We have a program for almost everyone. Call 800-314-7003!

If you are bidding on public projects for the City of Schertz you may be required to post a Bid Bond. The Bid Bond guarantees you will be able to provide the Performance Bonds required in the event you are the low bidder. In essence the Bid Bond pre-qualifies you for the work you are bidding on. Not all jobs require bonding but if they do we can assist you with Bid Bonds, and subsequent Performance and Payment Bonds as required by the state. Please call the Contract Bond Team at Pro Surety Bond for more information.

Click Here for Bidding Opportunities for the City of Schertz

Schertz is a city in Guadalupe Bexar and Comal Counties, and it is the 92nd most populous city in the State of Texas. The first settlers arrived in 1843, the Schertz family, though the place was called Cibolo Pit, and then Cutoff because when the Cibolo Pit floods, it cuts the city off. Fortunately the Schertz family were not inspired by these names and named it for themselves. Today, Schertz a suburb of San Antonio, and also the home to Randolph Air Force Base Air Education and Training Command, as well as the Air Force Personnel Center and it’s also famous for being the Showplace of the Air Force because of the abundance of Spanish Colonial Revival architecture.

In recent years, Schertz has been named one of the Best Places to Live by Money Magazine, because it’s a city that embraces its proud heritage while keeping its eye looking forward to the 21st century. Housing is exceptional here, and affordable to boot; in fact, the cost of living in general is almost 13% cheaper here than in the rest of the nation. But cost of living is not the same as standard of living, and Schertz offers numerous amenities that add to quality of life, like parks, festivals, and a goo dose of good ole Texas heritage pride. And the fact that it’s located near San Antonio is an added benefit.  Call the Schertz Surety Bond Pros Today at 800-314-7003!

How much do surety bonds cost? This is impossible to answer here because of a great number of factors, including what type of bond, which industry, the state of that industry, and which state you are in among many others. However, if a generalization can be made, it’s safe to say that most bonds fall within the 1% to 4% of the coverage amount. Of course, the amount of coverage will affect that greatly, as will being in riskier fields like construction where coverage can be very high, and rates can be quite steep.

Why do I need a personal credit check to get a bond? It’s safe to say that almost every bond requires a personal credit check, which raises the question as to why? The simple and short reason is that credit checks say volumes not only about your financial outlook, but what kind of person you are. It’s tough to admit, but this is the reason. How reliably you pay your creditors tells underwrites how likely you are to continue paying them, and that in turn tells underwriters that you have a conscientious personality. Give us a call at 800-314-7003

The Surety Bonds We See Most Commonly in Schertz, TX