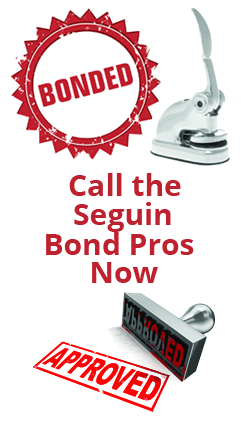 Stop now and call Pro Surety Bond for some of the most competitive prices on surety bonds. We specialize in all types of Contract and Construction Bonds including Payment and Performance Bonds, Subdivision and Off Site Bonds, Bid Bonds, License and Permit Bonds, Court Bonds, Fidelity Bonds and all types of Miscellaneous Surety Bonds. One call to 800-314-7003 is all you need to do. Let us demonstrate our great reputation! Call the Seguin Surety Bond Pros at 800-314-7003!

Call 800-314-7003! What is a surety bond? Surety bonds are like an insurance policy that you take out to cover someone else, in essence. If you own a moving company, say, you realize that there are a lot of regulation to follow--and the government in many states requires that you take out a surety bond to cover them (not you) in the event they must make a claim on the bond to cover any potential fines. It’s really just a formality because hardly anyone every defaults on fines, but the government isn’t in the business of trusting people; it needs a concrete commitment to make sure that the public’s interests are being taken care of. So, you buy the surety bond and the surety company, based on its own financial strength, vows to loan the moving company the money to cover anything that might be owed to regulators. Pro Surety Bond has over 25 years of combined industry experience, and we think that says a lot. Call us even if your credit is not great. We have a program for almost everyone. Call 800-314-7003!

If you are bidding on public projects for the City of Seguin you may be required to post a Bid Bond. The Bid Bond guarantees you will be able to provide the Performance Bonds required in the event you are the low bidder. In essence the Bid Bond pre-qualifies you for the work you are bidding on. Not all jobs require bonding but if they do we can assist you with Bid Bonds, and subsequent Performance and Payment Bonds as required by the state. Please call the Contract Bond Team at Pro Surety Bond for more information.

Click Here for Bidding Opportunities for the City of Seguin

Seguin is a city in Guadalupe County and it is the113rd most populous city in the state of Texas. Seguin is one of the oldest cities in Texas, being created only months after the creation of the Texas Revolution. One striking feature of the city was that is was the home of Dr John E Park, a scientist who experimented with concrete as a building material made from local sources, and the city today built nearly 100 structures made on concrete, a rather unusual feat that the time. About 20 of those structures still exist. Today Seguin is still a small town, but a beautiful one with tree lined streets which are graced with Queen Anne houses bungalows and other architectural benefits.

Seguin is a community of closely knit families, and while it is a small city, it boasts a top rated university, a state of the art hospital, a thriving arts scene and plenty of employment opportunities. All of these things the Seguin Economic Development Council believes will attract businesses who are looking for a premier destination for their business relocation. The SEDC works with existing companies and community leaders to provide incentives to attract industries in biotech, distribution, energy and technology.  Call the Seguin Surety Bond Pros Today at 800-314-7003!

Explain the surety bond underwriting process. Since surety bonds are issued on the assumption that you are not going to default on your bond, the surety is willing to take on the risk that you have incurred for the party requesting the bond. And so you might think of surety bond underwriting as an examination of your character and reputation, as opposed to when you get liability insurance in which the only thing examined is the likelihood of you incurring damages.

What are judicial bonds? Judicial bonds are required by courts for litigants in a legal altercation. Examples of judicial bonds include fiduciary bonds, which are required of those who administer estates or are the guardians of minors; court bonds, which protect a defendant from loss when his property has been attached during legal proceedings; finally there are bail bonds (not sold by Pro Surety Bond) which most people have heard of and they protect the court if a defendant fails to appear in court. Give us a call at 800-314-7003

The Surety Bonds We See Most Commonly in Seguin, TX