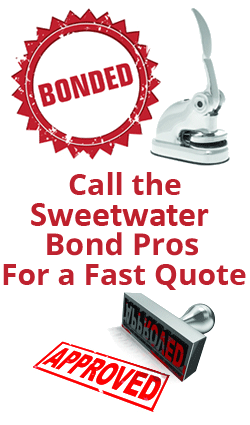 Speak to the voice of experience. Speak to Pro Surety Bond. We specialize in all types of Contract and Construction Bonds including Payment and Performance Bonds, Subdivision and Off Site Bonds, Bid Bonds, License and Permit Bonds, Court Bonds, Fidelity Bonds and all types of Miscellaneous Surety Bonds. Discover some of the best surety bond rates by calling 800-314-7003 Imagine if you could get a same day quote. Call the Sweetwater Surety Bond Pros at 800-314-7003!

We’re The Go To Company For Sweetwater Surety Bonds

Call 800-314-7003! What is a surety bond? A surety bond tells the people you do business with that even if they do not know you personally or know about your character, that you can be trusted because you have an objective third party who can make sure that your work is guaranteed. If you are in a business, for instance, that collects sales tax, your licensing body will want a commitment from you, backed by a guaranteed, that you will collect said sales tax and deposit it according to schedule. The government however is not realistically able to just take you at your word, so it require you to take out a surety bond, because only a large financial institution has the reputation to back up your guarantee. If a claim is made against your bond, the surety promises to make sure that the claim, if valid, is paid even if the surety must loan you the money temporarily. Pro Surety Bond has over 26 years of combined industry experience, so call us and let us show you how we got that much, even if your credit is not great. We have a program for almost every need. Call 800-314-7003!

If you are bidding on public projects for the City of Sweetwater you may be required to post a Bid Bond. The Bid Bond guarantees you will be able to provide the Performance Bonds required in the event you are the low bidder. In essence the Bid Bond pre-qualifies you for the work you are bidding on. Not all jobs require bonding but if they do we can assist you with Bid Bonds, and subsequent Performance and Payment Bonds as required by the state. Please call the Contract Bond Team at Pro Surety Bond for more information.

Click Here for Bidding Opportunities for the City of Sweetwater

The Wind Turbine Capital Of Texas

Sweetwater is a city in Nolan County, and it is the 204th most populous city in the state of Texas. Sweetwater got its start as a railroad town in 1881 when the Texas and Pacific Railway passed through the area, and to solidify the town’s position it built a small reservoir specifically to cater to the steam engines. Soon other railroads liked what they saw, and soon arrived the Kansas City, Mexico and Orient in 1903. In the first half of the 20th century Gulf Refinery operated a facility there around the same time as International Harvester, and the town was once even an important telegraph center. Today Sweetwater is the center of the Western Hemisphere’s leading wind power generation region.

Wind power is the main feature of Sweetwater industry, and it is through wind power that the economy branches out to other industries. For instance, Tesla Motors, manufacturer of electric cars has installed eight Supercharger stations in the parking lot of the Holiday Inn Express, and they can charge a Model S at 80% in 40 minutes and 100% in 75 minutes. Other sources that make Sweetwater an ideal commercial center include the Cline Shale Field with its oil and gas reserves, its outstanding workforce and its accessibility to major transportation arteries.  Call the Sweetwater Surety Bond Pros Today at 800-314-7003!

What does it say about a contractor if he is not bonded? It is common knowledge in the construction industry that unbonded companies have not yet had their company and personal character established. It doesn’t mean they have no such character, but that there is no documentary analysis of your risk worthiness. However, many project owners will tell you that unbondable contractors are often unorganized, inefficient and default more than average. A bonded company tells an owner that the contractor thinks and cares about its professional reputation.

What does “bondable” mean in the context of a contractor bid? If you are an electrical contractor, plumbing contractor, building contractor or any other kinds that works on construction projects, you have seen “must be bondable” of bid offerings. This simply means that the project owner wants to know if your company is strong financially and reliable. It does not necessarily mean that you will need a bond, but the process by which one acquires bondability can be long and arduous. Surety companies go to a lot of trouble to make sure that the companies they issue surety bonds to are a good risk, so when a project owner knows you are bondable, it tells him you are unlikely to default on a project. Give us a call at 800-314-7003

The Surety Bonds We See Most Commonly in Sweetwater, TX