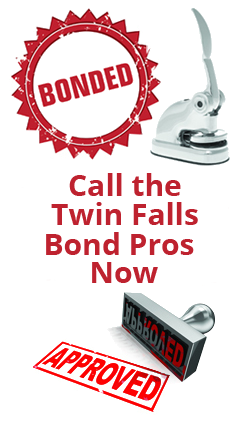 Surety bonds are the only thing we know how to do, so call Pro Surety Bond for professional service. We specialize in all types of Contract and Construction Bonds including Payment and Performance Bonds, Subdivision and Off Site Bonds, Bid Bonds, License and Permit Bonds, Court Bonds, Fidelity Bonds and all types of Miscellaneous Surety Bonds. To have your surety bond in no time flat, call 800-314-7003. Feel free to ask us any questions when you call. Call the Twin Falls Surety Bond Pros at 800-314-7003!

Call Us Today For Your Twin Falls Surety Bond Obligations

Call 800-314-7003! Just because you have been required to purchase a surety bond it's not a guarantee that you know what surety bonds are, so let us explain briefly. Let's say you own a business that transmits money. Regulators of that industry want people operating their business in good faith and handling the money that is handed to them responsibly. Naturally, if you break the regulations you can be fined, but what if someone tries to claim bankruptcy before paying a fine? Regulators will want a little bit of extra assurance that you won't do that, so they make you take out a surety bond. You could put up money of your own, but it would require a fairly sizable outlay-one that would significantly affect your credit rating. Pro Surety Bond assures its customers that it will do everything to find the best premiums for them, and that includes those with poor credit. Call 800-314-7003!

If you are bidding on public projects for the City of Twin Falls you may be required to post a Bid Bond. The Bid Bond guarantees you will be able to provide the Performance Bonds required in the event you are the low bidder. In essence the Bid Bond pre-qualifies you for the work you are bidding on. Not all jobs require bonding but if they do we can assist you with Bid Bonds, and subsequent Performance and Payment Bonds as required by the state. Please call the Contract Bond Team at Pro Surety Bond for more information.

Click Here for Bidding Opportunities for the City of Twin Falls

Twin Falls, Idaho, population 45,000, is the county seat and the largest city in Twin Falls County, as well as being the largest city in Idaho's so-called Magic Valley. The first people of European descent to come to the area that would later become Twin Falls were apparently attempting to discover an all water trail westward from St. Louis to Astoria, Oregon in the early 1800s, a route that would later be followed up by the Oregon Trail. In 1900 water rights were acquired by the Twin Falls Land and Water Company to provide irrigation canals for the 250,000 acres of farmland in the area. Twin falls would grow around this project as a planned community with sales of town plots reinvested back into the construction of more canals. In the 1970s Twin Falls became nationally famous when daredevil Evil Knievel attempted to jump the Snake River Canyon in a peculiar rocket-motorcycle hybrid vehicle. The jump was a failure, but Twin Falls became a household name. Today Twin Falls is a much more diverse place with a significant number of people from Bosnia and Herzegovina and many in others from the former Soviet Union has settled here, as well as a sizeable Hispanic population.

Twin Falls is a major regional commercial center for South Central Idaho and northeastern Nevada. Over the last 50 years or so the city has been trying to economically diversify away from an agricultural based economy to include other industries. As a result companies that have set up shop in Twin Falls include businesses like Dell Inc, Glanbia and Jayco a recreational vehicle manufacturer. In 2012, the Greek yogurt manufacturer Chobani opened its largest factory and distribution center in Twin Falls. Amalgamated Sugar Company has a food processing plant here with over 500 employees and an annual revenue of about $100,000,000. Major retail outlets are sprouted up over the past 10 years including a Wal-Mart supercenter, which employs about 100 people. China Mountain Wind, LLC has proposed a 300,000 acre wind farm, which is expected to generate about $33,000,000 in tax revenues. If the proposal passes the environmental impact test, it is expected to employ between 400 and 750 employees.Call the Twin Falls Surety Bond Pros Today at 800-314-7003!

Twin Falls sounds like a great place to open a business, but with a business comes a business license and with a business license in most cases you’ll need a surety bond, just like so many others. Do you run a SAG talent agency? Regulators will want you to show that you are operating your business in good faith. Do you own a business that lays sewers? The government will want some sort of guarantee that you will fulfill your obligation on the project. Do you own a construction business that employees union workers? There are labor laws that regulate how you do business. All of the above businesses of one thing in common and that is that they require a surety bond, and it's likely that you'll need one as well.

Our Motto Is, Only The Best For Twin Falls Surety Bonds

It's true that surety bonds may not be as interesting as watching a football game, except for us maybe since it's our business to be interested in them. We happen to think we're the best in the industry, we also think we'll be a good choice as your provider. We know you may want to check out the competition a little more before settling on a provider, but we think you should ask yourself a couple questions before you settle on one. One, will any potential provider go to the ends of the earth to uncover most reasonably priced surety bond rates he can find? Second, will he do this with utmost speed and offer a first class customer service experience? Pro Surety Bond excels on both counts and all we want is for you to call and let us prove it to you. Give us a call at 800-314-7003

The Surety Bonds We See Most Commonly in Twin Falls, ID