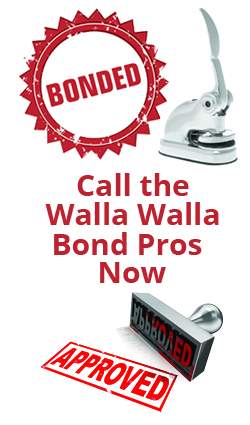 Call Pro Surety Bond today for a fast and free bond quote. We specialize in all types of Contract and Construction Bonds including Payment and Performance Bonds, Subdivision and Off Site Bonds, Bid Bonds, License and Permit Bonds, Court Bonds, Fidelity Bonds and all types of Miscellaneous Surety Bonds. Call 800-314-7003 now for quick delivery on your surety bond. Our agents know you are too busy to waste a lot of time. Call the Walla Walla Surety Bond Pros at 800-314-7003!

Call 800-314-7003! What are surety bonds? What if someone promised to do something important for you, but this thing were so important that you were leery about the promise? Well what if that person told you that they would make arrangements for you to be reimbursed if they did not come through on their commitment? That is what a surety bond is for. If you, say, collect sales tax for the department of taxation, they require a surety bond from you because collecting taxes is too important to leave it up to a handshake. Pro Surety Bond has over 25 years of industry experience, dealing with underwriters and digging up the best rates it can find in its network. Call for a fast and free quote even if your credit is not as good as it used to be. Call 800-314-7003!

If you are bidding on public projects for the City of Walla Walla you may be required to post a Bid Bond. The Bid Bond guarantees you will be able to provide the Performance Bonds required in the event you are the low bidder. In essence the Bid Bond pre-qualifies you for the work you are bidding on. Not all jobs require bonding but if they do we can assist you with Bid Bonds, and subsequent Performance and Payment Bonds as required by the state. Please call the Contract Bond Team at Pro Surety Bond for more information.

Click Here for Bidding Opportunities for the City of Walla Walla

“The City So Nice They Named It Twice”.

Walla Walla, Washington is a city in Walla Walla County. The name derives from the name of the local Native American tribe, which was who the North West Company first traded with when they arrived on the location in 1818. The city was incorporated in 1862, and a gold rush in Idaho created an explosion in wealth and population that Walla Walla was for a while the largest city in the territory and was even in the running to be the state capital. Today Walla Walla is a vibrant and exciting smallish city with great scenery, culture, wineries, and an all-around small town experience.

Agriculture is a major industry in Walla Walla. Whereas wheat has been and still is a big crop, vineyards and wineries have become more prominent in recent decades. There are currently an estimated 100 wineries in the Walla Walla area. Sweet onions are another major crop, most because sweet onions need rich soil, and there is a lot of it on Walla Walla. There is also a prominent corrections industry in the county, with the Coyote Ridge Corrections Center being located in Connell, and the prison is responsible for about $55 million in economic input into the county. Call the Walla Walla Surety Bond Pros Today at 800-314-7003!

How much does a surety bond cost? The cost of a surety bond can range widely, based on which state you are in, which industry you are in, what your personal credit and company credit history is, among other things. That said, cost is calculated according a percentage of coverage. So, if your bond is 1% of $100,000, you cost will be $1000. If you are getting a performance bond for a construction project, you will need a bond for each project. If you are purchasing a license and permit bond, you will typically need to purchase this annually. Percentages between 1% and 5% are the most common.

Are there any alternatives to surety bonds? There are, but you’d be hard pressed to find one that works as well for instance, there are letters of credit, which at one time were the most common way of providing surety. The problem with letters of credit is that if someone has a beef with your performance on a construction project, for instance, the bank is relieved of the obligation to investigate the matter if the proper documentation is produced. Give us a call at 800-314-7003

The Surety Bonds We See Most Commonly in Walla Walla, WA