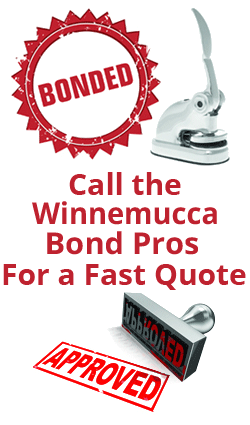 Pick up the Phone and Call the Bond Gurus at Pro Surety Bond! We specialize in all types of Contract and Construction Bonds including Payment and Performance Bonds, Subdivision and Off Site Bonds, Bid Bonds, License and Permit Bonds, Court Bonds, Fidelity Bonds and all types of Miscellaneous Surety Bonds. Some of the best rates on surety bonds await you at 800-314-7003. Our experienced agents will always put their best foot forward, so Call the Winnemucca Surety Bond Pros at 800-314-7003

Securing a Surety Bond in Winnemucca

Call 800-314-7003. The staff at Pro Surety Bond know that bond underwriting requires constant education coupled with experience. It's a complicated business and no one who is not experienced could possibly hope to understand it. Yet we find that time after time that we get the best rates for our clients. Having good credit is a major plus, but even those without good credit can benefit from our experience and training. So what are you waiting for? Call 800-314-7003 today and get the ball rolling.

Bidding Opportunities for the City of Winnemucca

If you are bidding on public projects for the City of Winnemucca you may be required to post a Bid Bond. The Bid Bond guarantees you will be able to provide the Performance Bonds required in the event you are the low bidder. In essence the Bid Bond pre-qualifies you for the work you are bidding on. Not all jobs require bonding but if they do we can assist you with Bid Bonds, and subsequent Performance and Payment Bonds as required by the city. Please call the Contract Bond Team at Pro Surety Bond for more information at 800-314-7003.

Click Here for Bidding Opportunities for the City of Winnemucca

Well, Winnemucca is not in the diamond business exactly, and it's not the gambling capital that Las Vegas and Reno are known for being, but with a population of about 7500, the town continues to thrive thanks of a variety of sources. The Newmont and Barrick Gold mining companies are the next best thing to diamond mining, and they are the big employers in the area. And there's also the Carry-On Trailer company, manufacturer of utility trailers and haulers has a factory that employs about 100. There is even an off-the-beaten-path tourist industry that operates casinos, hotels, and a convention center, replete with smaller and quainter version of the Las Vegas Strip.

With all these things going on, it’s not a surprise that it’s a prime location set up a business venture. If you’re the type of person who craves making his own way in the world, economically speaking, Winnemucca is a great place to start. When you do you’ll find that surety bond will be needed and almost every stop along the way. Many states and municipalities require a surety bond before you are even allowed to get a business license. That’s because surety bonds are a way of demonstrating to the governmental licensing body and the public at large that you are willing to put your money where your mouth is. Putting up money that can be forfeited if you don’t play right can be a good incentive to toe the line. Call the Winnemucca Surety Bond Pros at 800-314-7003.

Now, surety bonds are not needed in every situation where there is possible liability. Nevertheless many businesses willingly take out their own liability bond “just in case.” Indeed not all are related to business entities. For example, if someone brings an injunction against you in court, an injunction that is later deemed invalid, you may be entitled to damages, in which case you will be able to make a claim. Judges will be the ones ordering the junction bond.

If you’re opening a business, building a housing subdivision, opening an auto dealer lot, all of these businesses need surety bonds of some sort. Pro Surety Bond’s underwriters have more than 25 years combined experience, which means that it’s unlikely you will find a provider who can find better underwriting than we can. Just fill out an application, provide a few financial credentials so we can run a credit check, and we’ll call you back with your quote. It’s pretty simple. Most of the time we can offer you a quote on the same day. We serve all types of credit markets, so don’t be intimidated about having poor credit. We have a stable of underwriters who operate specifically in that market. Even if you need a fidelity bond or a subdivision bond, dialing 800-314-7003 is the first step in getting the great bond deals we have to offer.

The Surety Bonds We See Most Commonly in Winnemucca, NV