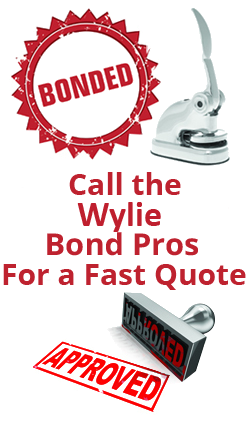 Call the Most Knowledgeable Team at Pro Surety Bond! We specialize in all types of Contract and Construction Bonds including Payment and Performance Bonds, Subdivision and Off Site Bonds, Bid Bonds, License and Permit Bonds, Court Bonds, Fidelity Bonds and all types of Miscellaneous Surety Bonds. So just give us a call at 800-314-7003 We are here to server your needs. Call the Wylie Surety Bond Pros at 800-314-7003!

Call 800-314-7003! What is a surety bond? A surety bond is a way of bolstering your word of honor when there is no other practical way of doing this. Think of it as paying someone else, a party that has the reputation you want to advance, to back up a guarantee that you will fulfill some obligation. For instance, if you own a small business, your industry probably has regulations of some kind, and regulators would like a guarantee that you will fulfill that promise. But they cannot just shake hands on it, they need something better, and that’s where the surety bond comes in. The surety has the reputation to back up the guarantee, usually in the form of a short loan to you. Pro Surety Bond has over 25 years of combined industry experience, and we can make it work for you; so call us even if your credit isn’t great. We have a program for almost everyone. Call 800-314-7003!

If you are bidding on public projects for the City of Wylie you may be required to post a Bid Bond. The Bid Bond guarantees you will be able to provide the Performance Bonds required in the event you are the low bidder. In essence the Bid Bond pre-qualifies you for the work you are bidding on. Not all jobs require bonding but if they do we can assist you with Bid Bonds, and subsequent Performance and Payment Bonds as required by the state. Please call the Contract Bond Team at Pro Surety Bond for more information.

Click Here for Bidding Opportunities for the City of Wylie

Honoring Our Past, Embracing Our Present, Planning Our Future

Wylie is a city in Collin and Dallas counties, and is the 73rd most populous city in the state of Texas Wylie was originally called Nickelville, local legend being that the first general store owner’s name was Nickel…or that it was a nickel store, take your pick. In any event, the name Wylie comes from Lt. Colonel William Wylie, a right of way agent for the railroad and Civil War veteran, and indeed it was the railroad that made Wylie because the railroad meant prosperity. After that agriculture became the big money maker for the town. Today Wylie hosts a large number of events like the Arts Festival, Parade and Tree Lighting, the Bluegrass on Ballard, and the National Night Out.

Wylie has a five member economic development board which is responsible for offering counsel to the city with respect to policy toward businesses, both resident and that relocating. In recent years it has been successful in drawing new businesses. Wylie has experienced a large increase in population since the 1990s, and many of the small shops in the downtown district were not able to keep up with all the demand, so these days you’ll see Walmarts and Target as well.  Call the Wylie Surety Bond Pros Today at 800-314-7003!

Why can’t I be covered with regular liability insurance? You could probably work something out so that liability insurance could provide coverage for you, but there is the first snag: liability coverage does not cover you, it covers the party that requested it. The purpose of the surety bond, is to protect the public or another entity from you actions, or lack thereof. Sureties have popped up to do this because it cannot be done in any practical way except with bonds. For instance, probate bonds, notary bonds, court bonds and the like protect some entity from mismanagement of funds, etc, and liability coverage would take months at least to make their way through the court if there were a dispute

To be sure, surety bonds are risk sharing device, like insurance, but surety bond rates are not calculated according to actuarial formulae like insurance. Rather, the surety underwriter, surety bond premiums are calculated according to how UNlikely a payout will be. Put another way, surety underwriters look at the financial stability of the company and its owners to determine if it is likely an indemnity will be paid. If the likelihood is judged to be too high, that party will not be able to find bonding. With liability insurance, pretty much anyone can be insured if the premiums are high enough. Give us a call at 800-314-7003

The Surety Bonds We See Most Commonly in Wylie, TX